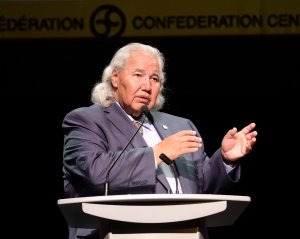 Sinclair is the 19th recipient of the Symons Medal at the Centre. Since 2004, the Centre has honoured 18 other distinguished Symons Medallists, including David Suzuki, Paul Gross, Stephen Lewis, and Dr. Margaret MacMillan.

The Symons Medal and Lecture Series is named in honour of Professor Thomas H.B. Symons, a long-time supporter of Confederation Centre and a Board Governor. Professor Symons, the founding President of Trent University, is widely recognized for his work in the field of Canadian Studies, particularly within public policy, heritage, and education.

Beginning January 19, and until further notice, Confederation Centre is closed to the public. This does not include the Provincial Library. Visit the website for more information.