The King and I: Hockey Bar is where familiar elements of daily culture (beer and hockey) collide with current art practices. Inspired by sports bars and basement rumpus rooms, this installation emulates the atmosphere of a public house.

The King (Eleanor King) and I (Stefan Hancherow) are the curators, the artists, and the bartenders in this experience. It’s one installation, but it’s made up of works by Canadian contemporary artists (with the exception of Andy Warhol), memorabilia borrowed from local hockey enthusiasts and archives, and the trappings of a functioning bar. Most importantly, it’s made up of those who populate the gallery when we are open for business, though the “business” is not for profit. The King and I’s primary mandate is to foster the discussion which happens when people come together and exist in common. 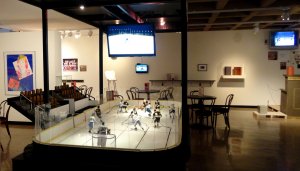 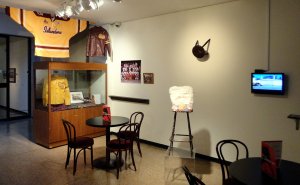