This exhibition provides a glimpse into the future of a city, St. John’s, Newfoundland and Labrador, through the work of 13 emerging artists I encountered through a series of interviews and visits conducted over three years. St. John’s is undoubtedly a city with character, with “culture.” Like most visitors, I had preconceived ideas about it. These biases were probably gleaned as much from growing up with the comedy show Codco as from any touristic marketing or stereotypes which, as an East Coaster myself, I was at least equipped to be skeptical about. And yet, I was warned: “Whatever you do, don’t try to define Newfoundland and Labrador culture. Don’t be yet another outside expert making recommendations or judgments.” So, as an outsider, I tried to listen.

In the process, I learned how these artists were providing questions in the form of “contemporary art.” For them, the “contemporary” (“with time”) compels collision between local and global forms, between tradition and future, and between stability and mobility. In this encounter, St. John’s occupies a particular position both at the margins and crossroads of an international, mobile economic reality, a cultural inheritance both oppressive and resistant, and a history of settlement and resettlement. It is also a place where, even as they cast a critical eye on the utopias often imposed by the outside world, artists have been able to imagine and build a community, to find shelter, however fragile, within a sublime, sometimes overwhelming natural world, and in sometimes precarious conditions. St. John’s, which for many of these artists is an adopted home, seems particularly hospitable to autonomous, creative, sometimes makeshift solutions. Perhaps this is because it is a place where modernity runs out of steam, where one knows the fragility of inhabitation, and of the constant need to make, remake, and protect the worlds that surround us. What artists are doing in St. John’s can inform us as we face an uncertain reality that demands imaginative and constructive energy.

This exhibition would not have been possible without the support of the RBC Foundation, Canada Council for the Arts, ArtsNL, Eastern Edge Gallery, the Rooms Provincial Art Gallery, Christina Parker Gallery, and Emma Butler Gallery, as well as the helpful advice of Mireille Eagan and Philippa Jones. 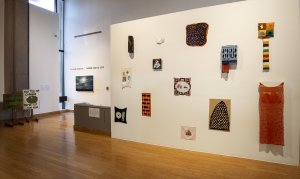