Marsolais’ solo, chamber music and orchestral playing has earned him awards from such international competitions as Geneva, Rovereto, Trévoux and the prestigious ARD Competition in Munich. He is also a horn professor at the Université de Montréal and the Domaine Forget Summer Academy. His most recent CD (featuring the Mozart Horn Concertos) just received an Opus Prize for best classical, romantic, post-romantic and impressionist album.

As part of his visit to Charlottetown, Marsolais will also be conducting a brass masterclass at UPEI the Friday before the concert. During Sunday’s concert, he will be performing Mozart’s Horn Concerto No. 3 as well as the accompanying solo horn part to Benjamin Britten’s Serenade for Tenor, Horn and Strings, which will also showcase the concert’s featured tenor, Marcel d’Entremont.

Originally from Merigomish, Nova Scotia, Marcel d’Entremont is a recent graduate of the Artist Diploma program from McGill University, where he was a Schulich Scholar, studying on full scholarship. He also has a Masters of Music from the University of Toronto, and a Bachelors of Music from Acadia University. d’Entremont is a frequent soloist and has performed with the Seton Cantata Choir, Nova Voce Provincial Men’s Choir, South Shore Chorale, Nova Sinfonia, Maritime Concert Opera, Confederation Singers, Cantabile Chamber Singers, Annex Singers and Talisker Players, and the Kitchener-Waterloo Symphony and Grand Philharmonic Choir. For the past five years Marcel has been a featured soloist with the Royal Nova Scotia International Tattoo, performing alongside musicians from around the world for audiences in the tens of thousands.

*This rental performance does not qualify for discounts offered by the Confederation Centre of the Arts. 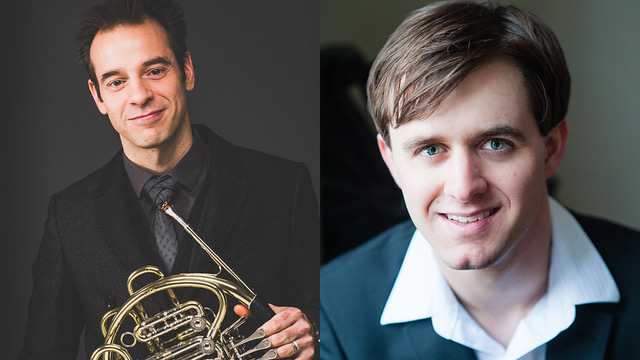 Aside from the aforementioned Mozart and Britten pieces, the program will also include Tchaikovsky’s Serenade for Strings, as well as Samuel Barber’s Adagio for Strings. Several members of the Singing Strings youth orchestra will be added to the PEI Symphony’s roster, providing the symphony with a larger string section, and an educational opportunity for those youth musicians.
The concert takes place at Zion Presbyterian Church at 2:30pm on Sunday April 15.  Tickets for adults are $40 and only $15 for students/children. As usual, there will also be a free pre-concert talk at 1:30pm in Zion’s Youth Chapel, where d’Entremont and Marsolais will chat with the audience and provide some personal insights into the music they’ll be performing.