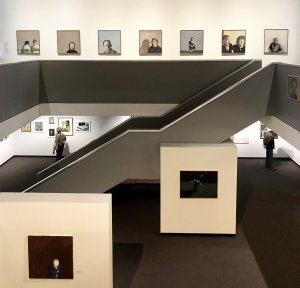 This exhibition celebrates the career of figurative painter Brian Burke (1952-2017), bringing together over 100 works from collections in North America and Europe. Born and raised in Charlottetown, the artist studied painting at Holland College and the Nova Scotia College of Art and Design, but was mostly self-taught. Focusing on the human figure, addressing existential themes of isolation and alienation, as well as broader social and political questions, and exploring the role of painting as a bearer both of fictions and truth, Burke’s work is characterized by its challenging intensity and dark wit. The artist was recognized early in his career with a grant from the Canada Council for the Arts that brought him to New York in 1986, where he broadened his vision and met his eventual life partner, artist Judith Scherer. Burke had been concerned initially with his immediate surroundings and memories, but increasingly he turned to universal themes. Though he spent much of his life working in Prince Edward Island, Brian Burke achieved recognition across North America. After 2012, he shared time in Murray Harbour, P.E.I. and Lucerne, Switzerland, where he also worked and exhibited regularly. Burke was named a member of the Royal Canadian Academy of the Arts in 2003. The artist died in 2017, leaving behind an unforgettable visual legacy.