For many Canadian artists, the engagement with popular culture has been a way to explore Canada’s relationship with its neighbour to the south. Selected from the Confederation Centre Art Gallery’s collection, the works in Cold Pop demonstrate how Canadian artists have responded, often ambivalently, to the rise of American pop culture, and to the phenomenon of Pop Art.

Although it actually originated in late 1950s England, Pop Art is generally associated with the United States, and the early 1960s. This is in part because the most successful Pop artists were American (notably Andy Warhol, Roy Lichtenstein and James Rosenquist); it is also because postwar American mass culture was Pop’s primary subject matter. Whatever their stance towards the ’57 Chevy, Marilyn Monroe, Elvis or Coca-Cola, Pop artists recognized that the world was increasingly composed of these kinds of products, advertising, and media imagery, and that if one was to represent or properly respond to contemporary reality, one had to operate in the arena of popular culture. Thus, key aspects of that imagery were incorporated into contemporary art. Pop Art was characterized by an interest in mechanical reproduction, ephemerality, mass appeal, the circulation of images through the media, gimmicks, kitsch, signage, branding, disposability, fame – all those things we now take for granted as the stuff of our everyday environment, but that hitherto had been excluded from the realm of Art.

The responses to mass culture shown in Cold Pop range from explorations of what could be called the Pop landscape (Erica Rutherford, David Thauberger, Karl MacKeeman); to the repurposing of the merger between identity and commerce (K.C. Adams, Luc Charette); to investigations of the state of authorship and craft in the era of mass production (Armand Vaillancourt, Colleen Wolstenholme, Clint Neufeld). The Confederation Centre Art Gallery was established in 1964, during Pop Art’s original heyday. The creation of the Confederation Centre itself could be seen as part of a nation’s response to the attraction and the threat of American mass culture at that time. And fifty years later the questions that motivated the first Pop artists remain with us, as the continuing ubiquity of Pop’s methods and visual language proves. 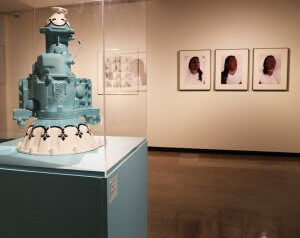 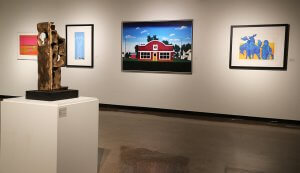