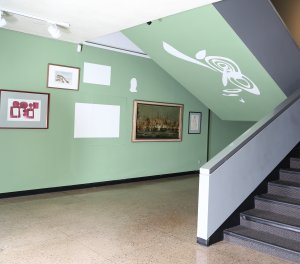 The Confederation Centre Art Gallery celebrates its 50th anniversary in 2014. To mark this important date, the Gallery has developed several exhibitions and commissioned projects that critically examine the institution, its building and its collection. To this end, artist Cathy Busby, who has recently worked with the collection of the Art Gallery of Nova Scotia (Atrium, 2010) and Union Theological Seminary in New York (About Face, 2012), was asked to produce an installation that explored the Gallery’s collection.

Acquired in 1964 takes as its starting point the creation of a collection that from the beginning aimed to reflect Canada’s art and art history. The artist was interested in how a time-based sampling, as opposed to an interpretive selection of a collection, can tell us something about a time and a place in the life of an institution. Busby’s installation shows every work the Confederation Centre Art Gallery acquired in 1964, the first year of its existence. In total, there are 33 works in the show of which 16 are presented directly, 16 are presented in the form of silhouettes and one is represented in name only. Those absent works are either 3-dimensional, no longer in the collection, or exhibited elsewhere. The space of the installation is delineated by a green background, its specific colour based on the rarely seen backings of paintings acquired at this time. The result highlights the institutional context of the acquisition, definition and preservation of Canadian art at a moment when the articulation of the country’s culture-as an extension of a colonial past or as the basis for an open-ended future-was subject to a national debate. 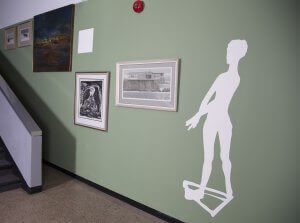 Evening Performances: The Box Office opens 2.5 hours prior to each performance.