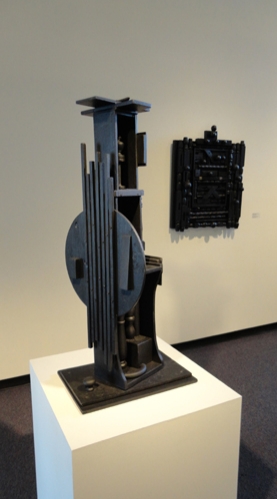 Catherine Hale’s assemblages and textile works are characterized by a dark, sublime beauty, and may be considered a form of gothic art that wouldn’t seem out of place amongst the imagery and cultural proclivities of a contemporary Goth sub-culture. This exhibition constitutes a survey of her longstanding penchant for the aesthetics and culture of death. This is not to say that she presents supernatural, horror-laden, or morbid tableaux, but rather, a visual poetry of formal elegance and unaccounted secrets that stimulates consciousness of the significant, ever-present fact of death and its complex meaning in our daily lives. Constructed of ready-made, found objects and materials, these works pose a critical challenge to a contemporary society that increasingly reinforces denial and avoidance of one of the most essential existential facts of human existence, the inevitability of the dying of the light. For Hale, the subject of death is central to the very necessity of art. Through her work, she proposes an open universally human conversation between life and death, or as the early American poet Emily Dickinson (1830-1886) has described: “a dialogue between the spirit and the dust.”

Solemn altar forms and shrines, black veils, and casket-like structures transport us to a symbolic funerary realm, to a meditation on potent themes of metaphysics and mortality. The faded ruins of history, the Victorian cult of mourning, and the secrets of the grave are intimated through careful juxtaposition of discarded objects and antique lace and clothing from a bygone era, residual belongings of the dead rescued from oblivion. Forgotten, displaced relics, ghosts of what used to be, or spiritual presences from the past summoned into present time, are transformed through the artist’s alchemical, constructivist process to provide a psychic link between unconscious memory and the material culture of death, between the intangible, a field of experience that cannot be known in a direct sense, and visible reality.

Organized by the Beaverbrook Art Gallery with the support of the Canada Council for the Arts, the Province of New Brunswick, the City of Fredericton, BMO Nesbitt Burns, and various friends, family, and associates of the artist.