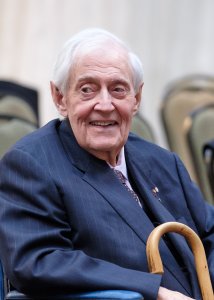 Thomas “Tom” Henry Bull Symons, CC, OOnt, FRSC, FRGS, teacher, historian, university president, author (born 30 May 1929 in Toronto, ON; died 1 January 2021 in Peterborough, ON). Thomas Symons was the founding president of Trent University (1961–72) and founding vice-president of the Social Sciences and Humanities Research Council of Canada(1978–84). He is perhaps best known as chair of the Commission on Canadian Studies (1972–84).

Thomas Henry Bull Symons was born in Toronto to Harry Lutz Symons, a First World War flying ace, and Dorothy Bull, the daughter of financier and historian William Perkins Bull. He attended Crescent School and Upper Canada College and studied at the University of Toronto Schools. He graduated with a B.A. from Trinity College, University of Toronto, in 1951. He then studied at Oriel College, Oxford University, graduating with a B.A. in 1953 and an M.A. in 1957.

In 1961, a group of residents from Peterborough, Ontario, asked Symons to create a university for the city. He served as president and vice-chancellor of Trent University from 1961 to 1972. The university welcomed its first students in the 1964–65 academic year. Under Symons, Trent University established Canada’s first Indigenous studies program, a Canadian Studies program, and the Journal of Canadian Studies. He was made Vanier Professor in 1979. Symons retired in 1994 but remained involved in university life.

Symons advised the provincial government of Ontario as the chair of the Ontario Human Rights Commission (1975–78), helping lead many advancements for the LGBT community. He was also a member of the Federal Cultural Policy Review Committee (1979–82) and chair of the Historic Sites and Monuments Board (1986–96). Symons was the founding vice-president of the Social Sciences and Humanities Research Council of Canada (1978–84). He was also chair of the Policy Advisory Committee to R.L. Stanfield (1968–75). He was a founding member of Heritage Canada and chair of the Ontario Heritage Trust (2010–17) and served on the National Library Advisory Board and the Canada Council, among others. Symons was also a Member of the Advisory Council of the Historica Foundation (now Historica Canada).

Thomas Symons published articles, reviews, and monographs on a host of topics. His publications include Life Together: A Report on Human Rights in Ontario(1977), with Rosalie Abella et al, and Some Questions of Balance: Human Resources, Higher Education and Canadian Studies(1984), with James E. Page. He also contributed to Ontario Universities: Access, Operations, and Funding (ed D.W. Conklin and T.J. Courchene, 1985).