“We’re really looking forward to our 3rd Super Show on the Island, and our first time headlining a show at Confederation Centre,” says lead singer John MacPhee from a break in finishing the new album. “This show is going to be a lot of fun and full of surprises; special guests, songs old and new, and lots more!”

Patrons can expect a thrilling set list that spans the Lions’ 15-year career arch, an electrifying visual show, and numerous stage surprises—all set within one of Canada’s premium large theatres, one where the Lions have collected awards and transfixed audiences at different stops along their career.

“I remember when Colin and I went to see Blue Rodeo on the mainstage when we were kids,” MacPhee recalls. “It was an awesome show and I left the Centre thinking how amazing it would be to play on that stage some day. ”

The ‘Super Show’ has become in the iconic band’s recent history, a visual spectacle of engaging performances and fun theatrics that have been the talk of the town each time, having been held previously at the PEI Brewing Company and the Delta Hotel. 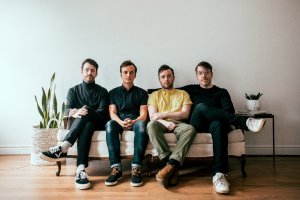 Paper Lions has been a model of independent music success since its inception in 2004. From amassing millions of streams, to landing several tracks on NBC & ABC network shows, to finding themselves in Billboard’s Top-10 chart for fastest-growing artists in the world, the bandmates have reached milestones that most artists will never know.

On the cusp of releasing their new album ‘Stay Together’ the band finds itself feeling nostalgic for the early days, as the fresh-faced local lads in ‘The Chucky Danger Band’, but also hopeful about the future. “I remember the first summer we started, I convinced my brother Rob, next door neighbour Colin and our high school friend Dave to start a band,” says MacPhee with a smile. “My foolproof plan for us to make a boat load of money was to play four shows at The Guild . We didn’t make any money, but playing the shows was super fun. 15 years later and not much has changed!”

On Stay Together the band plates up nine catchy new pop-rock songs, including the first singles ‘“Rhythm & Gold” and “Don’t Feel Like That”. The themes are semi-autobiographical, exploring the band’s own career arch, when they first were falling in love with making music and also finding their own romantic relationships along the way. They have created an album that celebrates their rock roots from the early days, but also goes deeper, creating an overview and remembering their dreams from the teenage days, when they started making rock’n’roll.

**Listen to new single ‘Don’t Feel Like That’ at the following link: https://www.youtube.com/watch?v=F0j0f3PQsuY