The Centre for All Canadians
Donate
It’s show time! After being forced to cancel the entire 2020 Charlottetown Festival due to the pandemic, Confederation Centre of the Arts is excited to raise the curtain for the 2021 Festival, which will run from June 3-September 4.
CEO Steve Bellamy and Artistic Director of Performing Arts Adam Brazier today announced three Mainstage productions for the summer festival, presented by CIBC, as well as a Young Company production. “On the Mainstage, we are excited to offer our patrons three enchanting, true stories from right here in Atlantic Canada,” says Brazier. “These stories demonstrate what it takes to be a hero, to put everything on the line, and to fight for those who cannot.”

Inspired by a true story, Between Breaths sails through the journey of Newfoundland’s Dr. Jon Lien, who spent his life’s work saving whales trapped in fishing nets. “The Whale Man” rescued over 500 whales and earned the respect of the province’s fishers, but his biggest fight came late in life as dementia threatened his body and mind.
Featuring a live score composed by The Once, Between Breaths is a profound play about the parts of ourselves we hold on to after everything else is gone. Sponsored by CAA Atlantic and presented by Artistic Fraud of Newfoundland, this production plays June 3-19.
Dear Rita — Making its world premiere in 2021 is an inspiring production celebrating the life and songs of the Maritimes’ most beloved singer-songwriter, Rita MacNeil. Woven around a script from Cape Breton’s Lindsay Kyte and music direction and arranging by P.E.I.’s Mike Ross, this cabaret musical features a powerful ensemble of actors accompanied by a sizzling hot band. Sponsored by Key Murray Law, Dear Rita plays June 29 to August 6.
“Dear Rita is a musical love-letter to a true fixture of Canadian culture, a fierce and passionate performer whose songs were international hits, inspiring generations of music lovers,” glows Brazier.
OLD STOCK: A Refugee Love Story —
Making its Island premiere is the internationally-acclaimed, award-wining OLD STOCK: A Refugee Love Story, presented by Nova Scotia’s 2b Theatre Company. The life-affirming musical tells the true story of two Romanian refugees meeting at Halifax’s Pier 21, as they await entry into Canada.
“We are thrilled to bring OLD STOCK to Charlottetown,” adds Brazier. “This is one of the most important pieces of theatre we have done in years. It has received rave reviews everywhere from New York to the U.K. and across Canada. This story is funny and dark and beautifully realized.”
Starring East Coast sensation Ben Caplan, this Klezmer music-theatre hybrid explores how to love and find a shared humanity after facing the horrors of war. Sponsored by Honibe, OLD STOCK plays August 12 to September 4.
THE RISING! 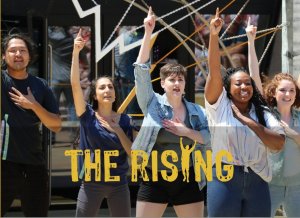 The 2021 Festival will also mark the return of the Confederation Centre Young Company, in partnership with TD Ready Commitment. The Young Company will perform the new production THE RISING!—a high-energy journey exploring protest music and moments in time where society stood up for civil and judicial rights. This production will be presented in the outdoor amphitheatre, from July 9-August 21.
Safety Protocols — Patron capacities will continue to be limited throughout the Centre and theatre seats will be safely staggered. Shows will be presented with no intermission and concessions are to be ordered online in advance. Mask-wearing and social distancing will remain mandatory throughout the complex.
“We look forward to safely welcoming audiences back to the Mainstage for a fun night out this summer,” offers CEO Steve Bellamy. “We continue to work closely with public health authorities to ensure a safe and entertaining experience for all patrons, whether in our theatres, galleries, or art camps on site.”
Festival tickets are on sale now for Centre members and go on sale to the general public on Saturday, April 10 at 12 noon A.T. From April 10-24, tickets for the best seats in the house are available at 25% off. Members have immediate access to this promotion. This applies to the first five performances after opening night of each of the three Mainstage shows. Tickets can be purchased online, via phone at 1 (800) 565.0278, or in person at the box office.
Photo cutline: Imagery from OLD STOCK: A Refugee Love Story and Between Breaths, both playing The 2021 Charlottetown Festival (submitted).