Confederation Centre of the Arts proudly displays the provincial and territorial flags on the corner of Queen and Grafton Street as the “Centre for All Canadians”. For National Indigenous Peoples Day a new, permanent flag was added during a public ceremony: the Mi’kmaq Nations Flag. 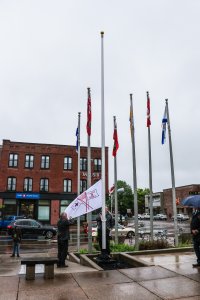 “It is a physical way of acknowledging the land on which we operate,” said CEO Steve Bellamy during the presentation.  “We hope it will be one of many ways we can eventually see members of the Mi’kmaq community look at the Centre and say, “That’s a place for me”.” 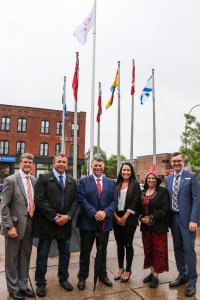 At the event were representatives from the provincial government, including new premier Dennis King, as well as Chief Junior Gould of the Abegweit First Nation and Chief Darlene Bernard of the Lennox Island First Nation. 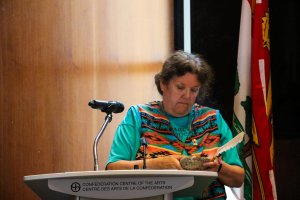 The presentation started with a prayer and smudging ceremony from Elder Thirly Levi. 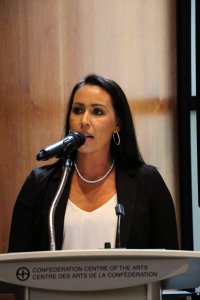 As a representative of the Board of the Fathers of Confederation Building Trust, Kateri Coade gave remarks.

“Through arts education, visual arts, and the power of live theatre, the Centre is working to cast a bright light on Indigenous culture and stories and be at the forefront of the national dialogue around Truth and Reconciliation,” said Coade.

“As a new board member, it is our hope that these and other projects – and important visual signifiers like today’s flag-raising – can shine this light far and wide and serve as yet another step forward together celebrating Canada’s evolving identity.” 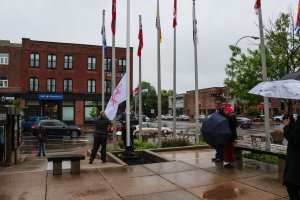 After the presentations, those in attendance went outside to witness the raising of the Mi’kmaq Nation Flag. 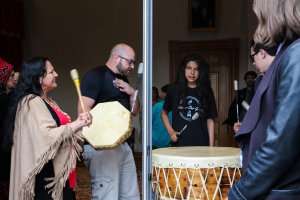 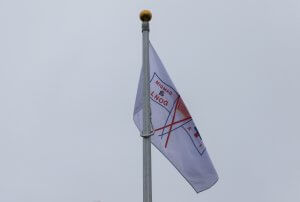 The Mi’kmaq Nation Flag will stay raised at the Centre on the Corner of Queen and Grafton Street–a permanent flag an flagpole that will be seen by thousands of visitors and locals alike.