Sobeys LIVE @ the Centre returns this month, beginning a riveting winter season of live concerts, choral music, and dance recitals at Confederation Centre of the Arts.

The second half of the 2019-20 LIVE calendar kicks off with a must-see affair in the Homburg Theatre on Saturday January 18, sponsored by Charm Diamond Centres. Canadian icon Steven Page will join forces with the PEI Symphony Orchestra (PEISO) for a thrilling fusion of pop and classical.

Page – who will also be joined by Kevin Fox on cello and Craig Northey on guitar – can’t wait to get things going. “We’re going to feature solo stuff, stuff from my latest albums Heal Thyself parts one and two, and some good-old Barenaked Ladies material,” he offers in a recent interview.

For this show, the Barenaked Ladies (BNL) co-founder will take centre stage with his powerful tenor, quick wit, and an arsenal of songs from his 30-year catalogue. Page will play guide through an evening featuring songs from his solo career as well as BNL classics as only he can sing them.

Featuring the lush accompaniment of PEISO, Page will perform BNL hits at this concert, like ‘Jane,’ ‘Brian Wilson’, and ‘Old Apartment’, as well as newer music.

The PEISO is the Island’s community-based symphony orchestra and includes more than 75 members. The Symphony presents seasonal concerts each year, as well as accompanying major touring names like Page, David Myles, and others.

Page says going solo was originally a huge learning curve, given his decades with the band. “I had been in the band since I was 18, and it was my identity. I only knew how to live as a member of that band. And suddenly, it was just me,” he reflects.

“It required a major shake-up, but it 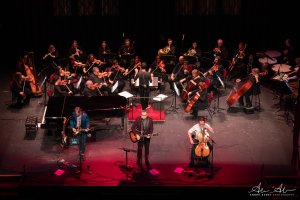 allowed me the opportunity to say ‘yes’ to so many things…I’ve gotten to do so much. I’ve learned from all my experiences, and the biggest thing I learned was that being solo doesn’t mean you have to go it alone.”

One of those collaborations is with Halifax’s Daniel MacIvor. The pair wrote a musical based on Page’s last two albums called Here’s What It Takes, which will debut at the 2020 Stratford Festival.

Join Page and the PEISO, LIVE @ the Centre on January 18 in the Homburg Theatre.