On the heels of Bohemian Rhapsody becoming the highest-grossing music biopic of all time, Classic Albums Live returns to P.E.I. with the Queen masterwork, A Night at the Opera. Confederation Centre of the Arts welcomes the much-celebrated touring act for its second performance of the Sobeys LIVE @ the Centre 2018-19 season, taking to the Homburg stage this Saturday April 6 at 7:30 p.m. This must-see show is sponsored by Charlottetown Inn & Conference Services.

A perennial Centre must-see, Classic Albums Live presents skilled musicians recreating the greatest albums of the ’60s and ’70s live on stage—note for note, cut for cut. The concerts are delivered as a pop symphony. The first half of the show presents the album in full, then the second act stages a ‘best of’ from Queen. Don’t look for costumes and look-alike theatrics at these ‘rock recitals’, just pure musicianship and the songs that shaped a generation.

“Nothing succeeds like excess—at least that’s the case with Queen’s breakthrough classic,” says music historian, Daniel Durchholz of A Night at the Opera. The 1975 full-length is regarded as Queen’s quintessential recording and includes the timeless hit ‘Bohemian Rhapsody’. Widely seen as one of the most significant rock songs 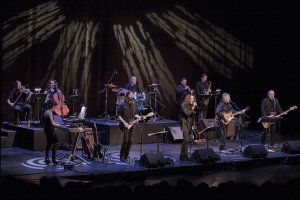 of all time, the six-minute single was championed by head-bangers a generation before being revived by the Wayne’s World fans.

The album is remembered for its precisely produced anthems, but it contains a wide variety of material, from the gorgeous piano-based ‘You’re My Best Friend’ and the Paul McCartney-esque ‘39’ to the volume-11 rockers ‘Death on Two Legs’ and ‘I’m in Love with My Car.’”

Photo cutline: LIVE @ the Centre favourites, Classic Albums Live return April 6 with the pedal-to-the-metal rock favourite, ‘A Night At the Opera’ by Queen (PixByLorne photo of CAL at the Centre in 2016).