They say it takes a village and this summer two Charlottetown Festival actors will take on the whole town.

Artistic Director Adam Brazier has announced Réjean Cournoyer and Jeremy Legat as the two performers bringing the hilarious and poignant comedy Bed and Breakfast to life, from July 11 to September 26 at Confederation Centre. Written by Canadian Mark Crawford, the comedic play will be directed by Associate Artistic Director Mary Francis Moore.

“We are very excited to have Réjean and Jeremy among our company,” says Brazier. “This is a hilarious show that offers two tour-de-force performances; two actors play an entire rural community, switching from character to character at break-neck speed.” 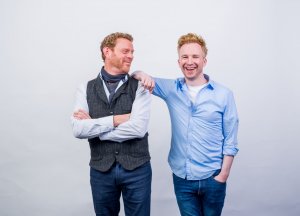 Sponsored by Honibe, Bed and Breakfast follows big city gents Brett and Drew as they endeavour to resettle in a picturesque small town. We follow them as they inherit the family home, move from Toronto, and struggle with renovation hell and their opening weekend—all leading to their big decision: do they stay or pack it all in?

Réjean Cournoyer is a household name in Charlottetown, following turns in Evangeline, Mamma Mia!, and others, and actually made his professional debut with the 1994 Young Company. “Everything I’ve accomplished is rooted here—my career, the best friends I’ve had, and the land I’ve bought here,” he shares. “My partner is a set and costume designer and we moved to the Island permanently in 2016; this is a very important place.” 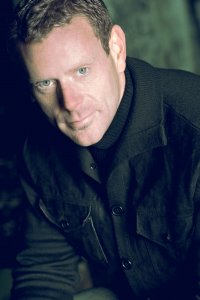 The Nova Scotia native recently performed in the critically-acclaimed Piaf/Dietrich (Mirvish) and has performed throughout Canada. He can relate to the challenge his character faces of establishing oneself in a new community. “These two men have some naiveté when they move to the small town, being fish-out-of-water. That’s where a lot of the comedy and charm of the play come from; both the comedic and serious.”

Jeremy Legat can also speak to the feeling of being ‘from away’, having recently moved to Canada from the U.K. following appearances in London’s West End (Wicked and Oliver!). “I think everyone can empathize with that from some point in their lives,” he offers.

The London native has enjoyed exploring the country, performing live theatre in Halifax, Hamilton, and Toronto as well as TV roles on Murdoch Mysteries and Netflix’s The Umbrella Academy. “It was bit of a culture shock coming to Canada, in the pursuit of new life and new adventure, but it’s been a very exciting ride so far.” 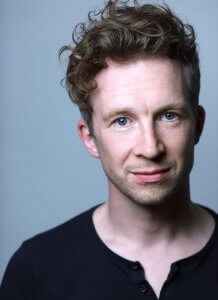 This blend of emotions is also felt by the pair as they approach Bed and Breakfast and its 40-odd characters, ranging from Torontonians Brett and Drew, to various local contractors, teenagers and nosy coffee shop baristas.

“It’s terrifying, but a good terrifying,” laughs Legat. “You’ve got to come up with all those personalities and make them different from one other and from Rejéan’s characters. Each one needs to be instantly distinct.”

Cournoyer agrees, “The writing is so good, it’s all there on the page and it’s very funny. It’s an exciting challenge.”

Both men will also appear in the Mainstage musical comedy, The Drowsy Chaperone, with Cournoyer playing the narrator and lead, ‘Man-in-Chair’, and Legat as the hilarious butler, ‘Underling’.

Experience it all, this summer at The Charlottetown Festival, sponsored by CIBC.