The Charlottetown Festival announces Sara-Jeanne Hosie will step into silver boots for the role of Tanya in Mamma Mia!,

opening this Friday August 9 at Confederation Centre of the Arts

(Charlottetown, P.E.I.) – Artistic Director Adam Brazier has announced a casting change for the forthcoming production of Mamma Mia! at The Charlottetown Festival.

Opening this Friday August 9, Mamma Mia! is sponsored by Tim Horton’s and plays until September 28 at Confederation Centre of the Arts. The high-spirited musical stars Rebecca Poff as single mother Donna and Katie Kerr as her only child, Sophie, who is also the bride-to-be in this sunny ABBA-driven tale. For Sophie’s wedding, Donna has invited her two lifelong best friends–practical and no-nonsense Rosie, and wealthy, multi-divorcée Tanya–from her one-time backing band, Donna and the Dynamos.

Rosie is played by Festival favourite Nicola-Dawn Brook and stepping into the role of Tanya is Sara-Jeanne Hosie. The pride of Victoria, B.C., Hosie made her Festival debut earlier this summer in the much-acclaimed remount of Kronborg-The Hamlet Rock Musical and also as Miss Stacey in Anne of Green Gables—The Musical™. 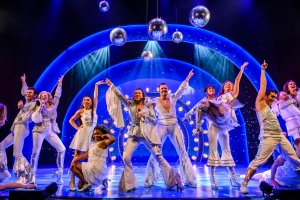 Hosie steps in for the Festival’s Susan Henley who had to withdraw due to injury. “This is my first time performing in Mamma Mia!” she offers, during a break in rehearsals. “I admire Susan Henley so much and am honoured to step into her sequins and stilettos.”

The actor has spent the last 25 years performing nationally in such roles as Mary in Mary Poppins; the Villain in the acclaimed Ross Petty Panto; to Alison Bechdel in the Canadian premiere of Fun Home. Also an accomplished director and choreographer, Hosie was nominated for a 2019 Dora Mavor Moore award for her choreography in Kiss of the Spider Woman (Eclipse).

Hosie comes by her Charlottetown Festival connection honestly, as both of her parents performed here, including appearances in the original Kronborg and as Matthew in Anne™ for her father, Bill Hosie.

“It was a childhood dream of mine to perform here,” Hosie recalls. “I remember being in the audience as a child, and now I get to smile at my parents in photos backstage every day.”

Presented as a co-production with the Grand Theatre in London, Ontario. Mamma Mia! is presented through special arrangement with Music Theatre International (MTI). For a complete production team and cast list, visit the Confederation Centre website.

CIBC is the title sponsor of The Charlottetown Festival. Confederation Centre wishes to acknowledge the Department of Canadian Heritage, the Government of P.E.I., and the City of Charlottetown for their continued support.

Photo cutlines: (1) Sara-Jeanne Hosie points to a photo of her father Bill in the backstage ‘wall of fame’ of past productions at The Charlottetown Festival (submitted).