Confederation Centre of the Arts is set to release a one-hour broadcast special entitled Feelin’ Mighty Proud! This Island-wide celebration weaves highlights from the iconic Anne of Green Gables–The Musical™ with a summertime journey across the Island, stopping at key destinations that focus on the works of L.M. Montgomery and the lore of Anne Shirley.

“Feelin’ Mighty Proud! is an homage to L.M. Montgomery, the original Anne of Green Gables novel, our famed Anne musical, and the Island as a whole,” shares Adam Brazier, artistic director with the Centre. “This project will make every Canadian proud and is a heartfelt reminder of the incredible impact our heroine has made world-wide—one who has brought so many people together for generations.” 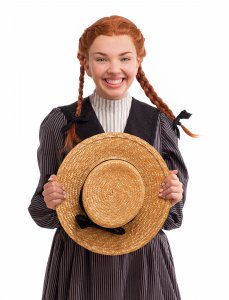 Directed by Brazier with Jason Rogerson, this new production is rich with special appearances, including video interviews from such luminaries as Amybeth McNulty (Anne with an E), RH Thompson, Gracie Finley and Glenda Landry, and current ‘Anne’, Emma Rudy. This past summer would have marked Rudy’s second straight season starring in Charlottetown. This season marked the first time in the musical’s 55-year Guinness Record-setting run that it could not be mounted, as the entire Charlottetown Festival was cancelled due to COVID-19.

Rudy is joined here by Hank Stinson and Marlane O’Brien as the Cuthberts, and Catherine O’Brien as Rachel Lynde in a selection of scenes shot on the iconic Homburg Theatre mainstage. More than a dozen Charlottetown Festival company members also appear performing the musical’s title theme, including Islanders Aaron Hastelow, Michelle Bouey, and Josée Boudreau, as well as the Festival Orchestra.

New performances for the special include rousing original interpretations of the songs of the famed musical, such as ‘If it Hadn’t Been for Me’ by Vishten; ‘The Words’  by Lennie Gallant; ‘Gee I’m Glad I’m No One Else But Me’ from Meaghan Blanchard shot in the famed ‘Anne house’ in Cavendish, ‘Kindred Spirits’ from Ava and Lilly Rashed, and more.

Feelin’ Mighty Proud will be broadcast in late September and is made possible due to the generous support of Canadian Heritage, the Province of Prince Edward Island, title sponsor CIBC, and production sponsor, CAA. Patrons can follow the Centre’s social media pages and confederationcentre.com for broadcast date and platform details.