Gather the family after Thanksgiving dinner this season for a heartwarming celebration of Anne Shirley! Featuring up-close highlights from Anne of Green Gables—The Musical™, cameos from Canadian icons, and re-imaginings of your favourite songs from the musical, Feelin’ Mighty Proud! is set to make its world premiere Sunday, October 11 at 9 p.m. on Eastlink and Confederation Centre social media.

This Island-made celebration weaves patrons’ favourite moments from the iconic Charlottetown Festival musical (taped live on the mainstage this season!) with a summertime journey across the Island, stopping at key destinations that focus on the works of L.M. Montgomery and the lore of Anne Shirley.

“Feelin’ Mighty Proud! is a must-see TV event this Thanksgiving that will make every Canadian proud,” says Confederation Centre Artistic Director Adam Brazier. “It is a charming reminder of the incredible impact our heroine has made world-wide—one who has brought so many people together for generations.” 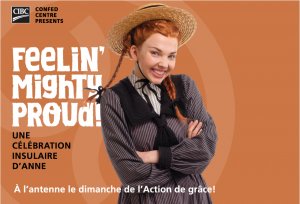 Directed by Brazier and Jason Rogerson, the one-hour special is rich with cameo appearances, including such luminaries as Megan Follows, Amybeth McNulty and R.H. Thompson (Anne with an E), Gracie Finley, and current ‘Anne’, Emma Rudy.

Stirring new performances include original interpretations of the treasured songs of the famed musical, such as ‘Open the Window’ from I and the Village (pictured); ‘The Words’  by Lennie Gallant; and ‘Gee I’m Glad I’m No One Else But Me’ from Meaghan Blanchard.

Feelin’ Mighty Proud will be broadcast October 11 on Eastlink and live on the Centre’s Facebook and YouTube feeds at 9 p.m., nation-wide It is made possible due to the generous support of Canadian Heritage, the Province of Prince Edward Island, title sponsor CIBC, and production sponsor, CAA. Patrons can follow the Centre’s social media pages and confederationcentre.com for more details.

Photo cutline: Popular Island world-music group ‘I and the Village’ perform a show-stopping rendition of ‘Open the Window’, one of many highlights in the one-hour special, Feelin’ Mighty Proud. (Jason Rogerson image)

Video trailer: Patrons are invited to enjoy a one-minute trailer for the special, online through YouTube.