On Sunday December 1 at 2:30 p.m., Sobeys LIVE @ the Centre celebrates one of the most enduring pieces of music in the Western choral cannon. The Confederation Singers, guest orchestra, and four featured soloists are set to perform Handel’s Messiah, the Baroque-era masterpiece that celebrates the life, death, and resurrection of Jesus Christ.

Messiah, an oratorio, is the most famous creation of German composer George Frederic Handel, and its performance still awes listeners more than 250 years after the composer’s death. Ludwig van Beethoven, citing Messiah, said Handel was the “greatest composer that ever lived.”

The concert is an annual tradition 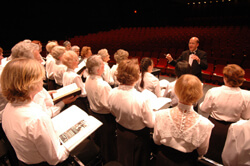 at Confederation Centre of the Arts, led by Choral Music Director Donald Fraser. Joining the centre’s adult choir, the Confederation Singers, this year are four guest vocalists, well known in the Canadian choral community.  The guest orchestra includes most members of popular Island ensemble, the Atlantic String Machine, who themselves released an album at the Centre’s Mack theatre this fall.

The Confederation Singers include more than 60 members from across the community. The singers present a varied program of music throughout the year, performing seasonal concerts on local stages a 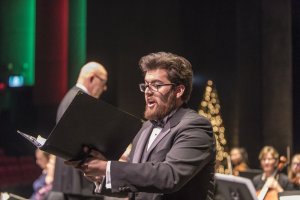 nd at a variety of events. Other concerts include Choral Music on a Holy Day (April 10) and the popular holiday tradition Sing Along Messiah, Dec. 28 , at the Kirk of St. James, where the audience is invited to participate.

The show will be presented in the Homburg Theatre of Confederation Centre. Tickets are available at the door, at Confederation Centre’s box office, online at confederationcentre.com, or via phone at 902-566-1267 (toll free at 1-800-565-0278). The Choral Music Programme is sponsored by Maritime Electric.

Concertgoers should leave extra time, parking a few blocks away or nearby in one of Charlottetown’s parkades. People with mobility concerns will still be able to access the Queen Street elevator into the lobby level of Confederation Centre. Those patrons being dropped off will need to do so at the corner of Queen and Grafton.