Founded in 1989 to mark the 125th anniversary of the 1864 Charlottetown Conference, the Players program have offered historic vignettes, guided walking tours, Victorian songs, croquet games with tourists, and improvised street encounters to thousands and thousands of visitors in Downtown Charlottetown.

More than 250 young people from across Canada have taken part in the youth leadership program to date. The troupe employs about a dozen young people from P.E.I. and elsewhere every summer and, since 2012, have been a key part of Confederation Centre of the Arts’ (CCOA) heritage and arts education offerings.

CN came on board as major program sponsor in 2017, launching special Canada 150 and rail-themed celebrations with the Players in cities across Canada. Now, to highlight CN’s own 100th anniversary, the troupe will return to Ottawa and Montreal in the weeks ahead to perform on Parliament Hill and participate in centenary celebrations. 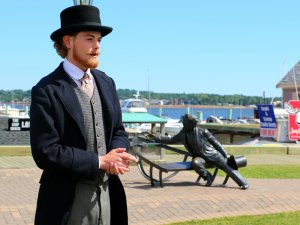 The Players launch their summer season at CCOA on Saturday, June 29, and will offer two enhanced public walking tours until August 18. ‘The Great George Experience’ guides tourists from the city’s stunning waterfront to Queen Square and includes historic vignettes and appearances from half a dozen different performers.

After years of public requests, The Ghost Tour returns this summer, hosted by ‘the Gravedigger’. This evening walk is offered every Friday and delves into the darker side of Island history, including tales of unsolved murders, ghost ships on the harbour, and even a famous execution.

All tours are family-friendly and the Great George Experience is available in French and English. For full program details, times, and to book walking tour tickets, visit the Confederation Centre website

Photo cutlines: (1) The Confederation Players will return to the nation’s capital in the weeks ahead, to perform on Parliament Hill and participate in celebrations marking the 100th anniversary of program sponsor, CN (submitted).