Confederation Centre carries a long and proud tradition of producing a holiday musical, pantomime, or Christmas show each year. This season, organizers are dreaming up something a little different, presenting Light Up the Dark! An Arts Education Celebration.

Staged as part of Sobeys LIVE @ the Centre, this spirited celebration of theatre, dance, choral and Celtic music, and visual art is one night only – December 14 at 7:30 p.m. in the Homburg Theatre. The theme Light Up the Dark! is in reference to the festivity of the Winter Solstice, marking our communal triumph of reaching the end of the calendar year and the return of the sun as days begin to get longer again.

Something a Little Different

Sponsored by Long & McQuade, this unforgettable concert will feature a variety of talent. This includes members of dance umbrella ranging from 10 to 70 years of age, such as the ‘Dance for Health’ class dancing to Sarah Bareilles’ ‘Wintersong’, youth dancers performing excerpts from The Nutcracker, and a selection from the School of Performing Arts (SoPA) Musical Theatre program.

“I’m excited about the theme of this performance; there is a universality to celebrating the solstice – cultures around the world acknowledge the changing of the season, regardless of religious tradition. And for those of us living in the northern hemisphere, getting past the dark days of November is certainly something to celebrate!” says Peggy Reddin, director of arts education with the Centre. “There is also a second meaning, which is that arts education does indeed light up people’s lives. It is a vehicle for self-expression, and a place to find joy.” 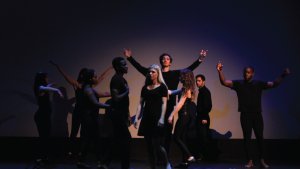 Light Up the Dark! will feature more than 75 performers, including the Celtic Music Ensemble from Holland College’s SoPA program and students from the SoPA/Confederation Centre dance and theatre programs. In addition, the Centre is delighted to collaborate with local troupe, the Mi’kmaq Heritage Actors who will perform a winter legend based on traditional Mi’kmaq legends. Lastly, the SoPA a cappella show choir, ‘the SoPA-tones’ will perform ‘You Will Be Found’ and ‘Song for a Winter’s Night’.

The celebration will also feature the work of 15 students from Confederation Centre’s visual arts stream, whose work will be exhibited in Memorial Hall prior to show-time. These students are participating in a partnership project with the PEI Association of Newcomers to Canada, led by Kate Sharpley, visual arts educator with the Art Gallery.

It Takes a Village

Other creative team members include Hannah O’Donnell as Music Director; Morgan Saulnier as piano accompanist; Taryn Kristalovich and Kylie Fudge-Jensen as choreographers, and Jeana MacIsaac as stage manager. With the dance umbrella pieces Julia Sauve is choreographer for the Dance for the Health of It class, while Wanda Naylor and Sandy Zinck are Choreographer and Vocal Director for the Senior Musical Theatre Class, respectively.

Tickets can be purchased at the Centre box office, or online. Special thanks are extended to the Department of Canadian Heritage, the Province of Prince Edward Island, and the City of Charlottetown, as well to media sponsors Ocean 100, Hot 105.5, and The Guardian.