Award-winning Quebec-based artist collective BGL, who have represented Canada at the Venice Biennale, and have won major acclaim around the world, opens an exhibit of new work at the Confederation Centre Gallery (CCAG) on July 17th.

“This is going to be the last time we will be creating new work as a collective, so even if there are some works that seem to reflect on our end – like the replica of a 19th century hearse or the ‘crashed’ motorcycle – we want them to be joyful, fun, and humorous,” explains BGL member Nicolas Laverdière. “The pleasure and freedom in making art for a living was the reason we got together in the first place. Art was always an adventure into fun for us.”

BGL (Jasmin Bilodeau, Sébastien Giguère, and Laverdière) is known for their amusing and critical look at our relationship with nature and disposable consumer culture. They are intent on recycling and recontextualizing their work within a gallery space. Described as “provocative, critical, and explosive”, their pieces draw attention to social and political concerns. Their work is found in collections throughout Canada and has been exhibited around the world.

In Two Thumbs Up (Arts and Crafts), they reprise elements of their Canadassimo project originally presented at the Venice Biennale in 2015, along with a major new body of work. Curated by Pan Wendt, the CCAG exhibition features two galleries of work. One will include the studio installation from Canadassimo, and the other will show BGL’s latest work, including a series of pieces made with birch twigs.

“Arts and Crafts is a title that makes sense for the new body of work, which really comes out of the poetry of different kinds of manual labour, things you can only say intuitively in the roughness of manual work,” offers Laverdière. “There’s something about the handmade aesthetic that’s true for us.” 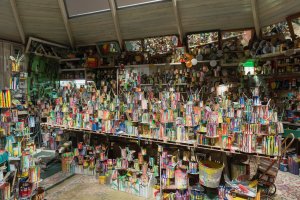 e are truly honoured to host the final exhibition of new work by some of Canada’s most imaginative, brilliant, and playful sculptors, and we have really been impressed by BGL’s work over the years,” shares CCAG Director Kevin Rice. “BGL was a pleasure to work with during Oh, Canada, a 2014 exhibition organized by Massachusetts Museum of Contemporary Art, and presented in our gallery, and we are very excited to be showing a selection of their latest work, as well as their truly grand-scale Venice installation.”

BGL—Two Thumbs Up (Arts and Crafts) opens on Saturday, July 17 and will be on display until December 2021. Special thanks are extended to the Arts Hotel, the official accommodation sponsor in Charlottetown for BGL artist collective.