The first is an open-air concert series taking root in the Centre’s outdoor amphitheatre—the venue known to most as the regular home for the TD Young Company. For this new series, entitled Set in the Sun, a different Island songwriter or instrumental duo will perform a live concert on site, every Wednesday and Saturday at 5 p.m.

Presented by program sponsor Honibe, Set in the Sun is part of a slate of programming being unrolled this 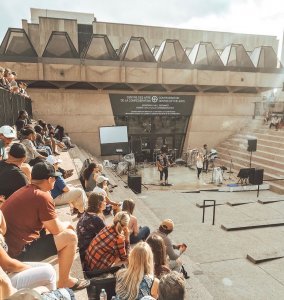 summer under the banner, CIBC Confed Centre Presents. Another major announcement will be coming later this month around a digital series.

Set in the Sun is a 12-part live series that highlights a thrilling cross-section of local talent, ranging from fiddle music to classical, to folk, rock, and hip-hop. Seating will be limited to 40 people per concert, with parties of up to four staggered safely throughout the venue.

“The Centre team has been thrilled to reopen to the public over the past month, and now we invite our patrons to enjoy live music with us in a safe and relaxed setting,” shares Adam Brazier, artistic director. “This diverse series presents some of finest emerging and established songwriters from across the Island.”

s are offered free-of-charge; however, a ticket is required to reserve a patron’s space. Patrons can book a max of four tickets per show.

Performance dates and ticketing will be made available each Wednesday throughout the series, revealing the performers’ names for the following week’s two concerts and allowing patrons to book their seats.

Also announced today under CIBC Confed Centre Presents is the return of the Confederation Brass Quintet. This long-standing Centre program offers live recitals on the outdoor plaza, found on the corner of Queen and Grafton. Running July 14 to August 29, from Tuesday to Saturday, the ensemble will perform twice daily at 11:15 a.m. and 12:45 p.m.

The Confederation Brass have delighted audiences over the years with a mix of popular and classical tunes arranged for brass. The quintet is comprised of horn, trombone, tuba, and two trumpets. The ensemble ranges from high school to university students who are on a career track to become teachers or professional musicians.  This year’s group includes Henry Orford, Shaw Nicholson, Justin Amador, Connor Nabuurs, and Olivia MacPhail.