It may be hard to believe, but Art in the Open, Charlottetown’s outdoor public art festival, is 10 years old! The first edition, held in August 2011, brought together the Confederation Centre Art Gallery, this town is small, inc., and the City of Charlottetown to collaborate and create a festival that celebrated visual art in the setting of the city’s parks and other public spaces.

Since then, partners such as Film PEI, the Black Cultural Society of P.E.I., la Fédération culturelle de l’Île-du-Prince-Édouard, and CreativePEI, as well as many Canadian artists and community groups, have joined to sustain what has become a beloved event for audiences of all ages and backgrounds. Each year children and adults eagerly await the ‘March of the Crows’, and everyone loves being in Victoria Park at night, surrounded by new art works by local and national artists, with a chance to enjoy the campfires of Scott Saunders’ Field of Fire.

After 10 years, the memories have piled up. And as longtime Curator Pan Wendt and Coordinator/Cura 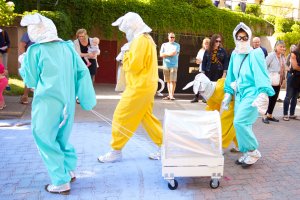 tor Becka Viau move on from the festival, this year seems appropriate time to reflect on its history, and on the over 350 projects that it has featured in a decade.

Charlottetown-based artist-archivist Donnalee Downe and Wendt have been sourcing documentation, artifacts, and artworks from artists as well as the general public, all towards a new exhibition, entitled Art in the Open at 10 Years: An Incomplete Archive, that will be open to the public in the Centre’s concourse this summer.

“It is amazing to go through the history of this festival—so many great projects and memories,” reflects Wendt, who is is proud to have involved for the past decade. “Just looking at the list of artists, I can’t believe all of the amazing creative people who have contributed. It has been the most successful way we have succeeded in connecting art and artists with the public over the years.” 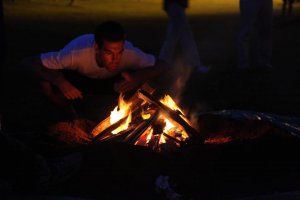 He welcomes visitors to visit the exhibition from June 19 to September 19 at the Centre. “I think audiences would love to see all of the images and records we’re collecting in one place. Donnalee is a master organizer, categorizer, and collector, and she’s bringing an artistic vision to the exhibition as well,” he adds.

Art in the Open at 10 Years: an Incomplete Archive can be seen at Confederation Centre in Charlottetown. Art in the Open 2021 runs from 4 p.m. to midnight, August 28.