Presented as part of Sobeys LIVE @ the Centre, Cristian de la Luna and his backing band will be in performance this Friday, March 8, in Studio 1 at Confederation Centre.

The performer and human rights activist creates songs inspired by the harsh realities of exile from his homeland and adaptation in a new country. Although confronting difficult topics, these songs are infused with words of friendship. Writing in Spanish, French and English, de la Luna understands that music is a universal language that knows no boundaries.

de la Luna was born in Colombia and grew up in the noisy bustle of Cumbia, Porro, and San Juanero. He played trumpet in a traditional Colombian music ensemble and percussion in the school band. It was there that he found the unalterable passion of his life: music. The young musician emigrated to Quebec at the age of 17 where the exile and nostalgia for his homeland served him to compose his first songs, and deliver his first concerts and tours in the province of the “language of Molière”. 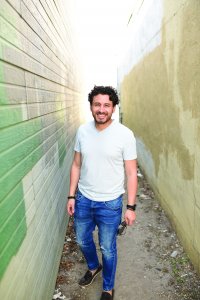 de la Luna now calls Edmonton home and recently released first solo album, Sabes (“do you know”). This album takes listeners to the South and invites you to dance to the sound of syncopated rhythms and catchy melodies. Sabes is a fusion of Afro-Caribbean, Funk, and Pop. Some of songs are rhythmic and dancing while others feature poetic lyrics and exuberant melodies. Exploring themes such as universality, de la Luna’s music pays homage to his Colombian roots and his newfound experiences in Canada.