The curtain will rise in just two weeks for the Island premiere of Between Breaths, presented by Artistic Fraud of Newfoundland. The poignant play kicks off The 2021 Charlottetown Festival, which will present four musicals between June and September at Confederation Centre of the Arts.

Inspired by the true story of Dr. Jon Lien – known as ‘the Whale Man’ – Between Breaths is a profound memory play that sails through Dr. Jon’s career and the death-defying work of saving whales trapped in fishing nets off Newfoundland.

“I have always been drawn to true stories in the theatre”, offers Artistic Director of Performing Arts, Adam Brazier. “Experiencing real life stories on stage connects me to our past while demanding creativity from both the storytellers and the audience. Between Breaths reminds us how small we are and the immense influence we can have.”

This dynamic memory play begins late in Dr. Jon’s life and moves backwards, to his first whale intervention. With his head down in freezing waters and armed only with a snorkel and knife, Dr. Jon would save the 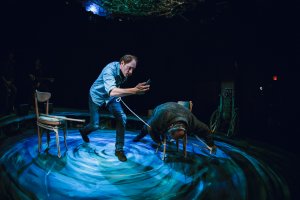 lives of over 500 animals and earn the hard-won respect of Newfoundland’s fishers.

Featuring an evocative live score from Island favourites, The Once, Between Breaths weaves dynamically from the Whale Man’s origins in the American Midwest, throughout his incredible career, right up to the biggest fight of his life—facing dementia in his later years.

Directed by Jillian Keiley (Artistic Director of the National Arts Centre) Between Breaths plays June 3-19 in the Mainstage Theatre.

Sponsored by CAA Atlantic, the play features a tight-knit ensemble of Newfoundland-based actors and musicians. These include: Steve O’Connell as Dr. Jon Lien; Bernardine Stapleton as his wife and caregiver, Judy Lien; and Darryl Hopkins as Wayne the Fisher, and other roles. The actors are accompanied by Andrew Laite (vocals/guitar); Kelly McMichael (vocals); and Josh Sandu (mandolin/bodhran/vocals). 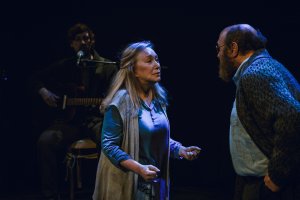 Festival tickets can be purchased online, via phone at 1 (800) 565.0278, or in person at the Centre’s box office. Please be advised Between Breaths contains occasional use of strong language.

Patron capacities continue to be limited to 300 per-performance and theatre seats are safely staggered. Shows will be presented with no intermission and concessions are to be ordered online in advance. Mask-wearing and social distancing remains mandatory throughout the Centre.

Photo cutlines: [1] Steve O’Connell performs as ‘Dr. Jon Lien’ in a scene from Between Breaths, which previews June 3 and opens June 4 at The Charlottetown Festival.

[2] Darryl Hopkins and Steve O’Connell, in a scene from Between Breaths, presented by Artistic Fraud of Newfoundland.