-Islander talks ‘Dear Rita’, Soulpepper’s ‘Rose’, growing up at the Centre, and how representation in theatre matters-

Islander Michelle Bouey will make her Festival debut next year, performing in the musical love-letter to icon, Rita MacNeil, Dear Rita at The Mack.

An alumna of the TD Young Company, Bouey effectively grew up at the Centre, including years of dance recitals and drama festivals. The Sheridan College graduate will also appear in Anne of Green Gables—The Musical™ next summer, playing Prissy Andrews.

A: Seafood and the beach! I love being so close to some of the best beaches in the world and the sense of timelessness that goes with it. After a day at the beach it’s fun to have a drink with a friend, while listening to jazz on the Row. A classic Island experience is running into at least three people you know, almost anytime you walk around the downtown area. My favourite thing of all is being able to spend time with my family, who I don’t get to see as often as I’d like.

Q2: Do you have a cherished Centre memory? 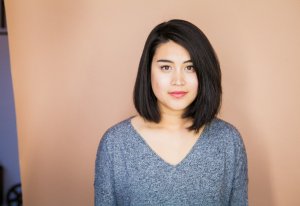 Q3: Are you excited to perform in two very different productions all summer?

A: This is my first time doing theatre in rep [two shows at once], so I actually can’t believe I get to live in two worlds at once. It’s thrilling to me. I love The Mack and the intimate safe space it creates. It’s the kind of venue that gives you more of a chance to connect with your audience.

I grew up listening to Rita MacNeil and watching her Christmas special. To think that a small group of us get to honour her legacy—on East Coast soil, none the less—is so special. For ‘Anne’, I’ve always wished I could be a part of that story. As a child, I never thought being in the show was something that could happen, because of my Asian heritage. Being in a space that feels like home, in a show I’ve cherished in my heart for so long, is special, full-stop. Also, there might just be that kid who looks a lot like me and has their own aspirations to be on stage one day.

Q4: What’s one thing you think many people don’t realize about Anne™?

A: I think many people go into the show thinking it’ll just delightful and fun—and it certainly is! But, I don’t think anyone can prepare you for the heartwarming, deep, emotional journey it takes you on.

I’ve seen the show every year and then some since 1997 and it never fails to touch me greatly. I didn’t think I would see it last year but, my good friend, Emma Rudy, took on the role and I had to go. She shone so brightly and captured the sparkly personality of Anne perfectly. I’m so excited to be working with her next summer.

Q5: You’re also an active songwriter, what were your personal highlights in 2019 and anything on the horizon to look out for?

A: 2019 has been, thankfully, a busy year. I would say that two things stand out and it’s interesting how they represent my two passions. Firstly, being part of Mike Ross’s new musical ‘ROSE’ at Soulpepper Theatre was incredible. Based on Gertrude Stein’s children’s book of the same name, Mike captured the magic and innocence of the book perfectly. I played many different parts, as well as my cello. The cast, the show, the magic…I’ll never forget.

The other amazing experience of 2019 would have to be taking part in Musical Stage Company’s production of ‘UnCovered.’ On the stage of Koerner Hall in Toronto, we sang the songs of Stevie Wonder and Prince, uncovering the different layers of their music in unique and personal ways. Working with Canadian musical icons such as Jully Black, Divine Brown, and Jackie Richardson was deeply rewarding.

As far as my own music goes I’ve released three singles on the usual platforms and a few more are on their way. Aaron Hastelow, no stranger to Island audiences, and I will also be performing a cabaret at The Guild on January 3rd and 4th in the New Year. I may just be revealing a new song or two…