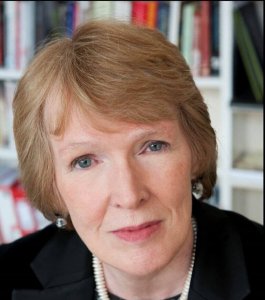 Confederation Centre of the Arts was pleased to award the Symons Medal to internationally-acclaimed historian and author Professor Margaret MacMillan.

The Symons Medal is one of Canada’s most prestigious honours and recognizes a distinguished individual who has made an exceptional contribution to Canadian life. The award was presented to Dr. MacMillan at Confederation Centre on November 23, 2018.

World-Renowned Historian
Professor of history at the University of Oxford and former Provost of Trinity College at the University of Toronto, Dr. MacMillan is one of the world’s most distinguished specialists in modern international history. Her research focus is British imperial history, international history of the 19th and 20th centuries, and the causes of war, specifically World War One. She is known as a historian whose published work is engaging for both experts and general audiences. Her many publications include Paris, 1919: Six Months that Changed the World, The War that Ended Peace: The Road to 1914, and History’s People: Personalities and the Past. Among her many awards and accolades, Dr. MacMillan is a Companion of the Order of Canada, a Fellow of the Royal Society of Literature, and holds seven honourary degrees; she was the first woman to win the Samuel Johnson Prize (now The Baillie Gifford Prize for Non-Fiction). Also known for her insightful contributions to public discourse, she is a sought-after commentator on pressing international issues of our time.

“On behalf of CEO Jessie Inman and Professor Tom Symons, for whom this medal and lecture is named, we are proud to announce the esteemed Professor Margaret MacMillan as the recipient of the 18th Symons Medal,” said Chair of the Fathers of Confederation Buildings Trust, H. Wayne Hambly.

The BBC  announced Professor MacMillan as the 2018 BBC Reith Lecturer, an internationally renowned series now celebrating its 70th year. She will deliver five lectures in June 2018 exploring the relationship between humanity and war in London, York, Beirut, Belfast and Toronto, which will then be broadcast on BBC Radio 4 and BBC World Service.