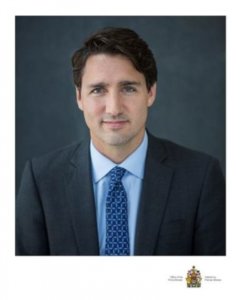 Confederation Centre of the Arts was pleased to award the 2017 Symons Medal to the Right Honourable Justin P.J. Trudeau, the 23rd Prime Minister of Canada. The Symons Medal was presented to Mr. Trudeau at the Centre on November 23, 2017.

On October 19, 2015, Mr. Trudeau led his party to a majority government winning 184 seats, and ridings in every province and territory. He was sworn in as Prime Minister on November 4, 2015 and two years into his mandate, Mr. Trudeau leads a government focused on creating new jobs, fostering strength out of Canada’s rich diversity, fighting climate change, and achieving reconciliation with Indigenous Peoples. A proud feminist, Trudeau also appointed Canada’s first gender-balanced Cabinet in 2015.

The eldest of three boys, Mr. Trudeau was born in 1971 in Ottawa and grew up with the profound influence of his father, former Prime Minister Pierre Elliott Trudeau, and his mother, Margaret Trudeau. He was raised speaking both French and English and has family roots in both eastern and western Canada.

Mr. Trudeau graduated from McGill University in 1994 and completed the Education program at the University of British Columbia in 1998. As well as teaching for several years in Vancouver, Trudeau served as the National Chair of Katimavik, on the board for the Canadian Avalanche Foundation, and as an advocate for young people and the environment.

About the Symons Medal Ceremony and Lecture:
The Symons Medal and Lecture Series is named in honour of Professor Thomas H.B. Symons, a long-time supporter of Confederation Centre and a Board Governor. Professor Symons, the founding President of Trent University, is widely recognized for his work in the field of Canadian Studies, particularly within public policy, heritage, and education.