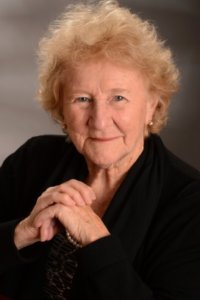 Renowned Acadian novelist, playwright, broadcaster, and scholar, Antonine Maillet, C.C. was the winner of the 2016 Symons Medal, one of Canada’s most prestigious honours, held each fall at Confederation Centre of the Arts.

Confederation Centre – Canada’s national memorial to the founding of the country – presents the Symons Medal annually in order to recognize a distinguished person who has made an exceptional contribution to Canadian life.

Born in 1929 in Bouctouche, New Brunswick, Maillet is one of the most celebrated writers in Canadian literature. Her play La Sagouine (1971), which celebrates the rich, colourful, and distinctive culture of Canada’s Acadian people, has become a classic of French-language theatre in this country. Her 1979 novel Pélagie-la-Charette was the first work by a non-European to win the Prix Goncourt, France’s greatest literary prize. This story charts the triumphant return home of the Acadian people after the 1755 Expulsion, and made Maillet an overnight success in France, where it sold over a million copies.

Since the breakthroughs of La Sagouine and Pélagie-la-Charette, Maillet has been one of the most respected figures in French-language literature in Canada, publishing over 20 novels, numerous plays, and several translations (including French translations of Shakespeare, Ben Jonson, and Bernard Shaw). Her remarkable body of writing, translated into numerous languages, is an immense contribution to literature in Canada and throughout the world, and makes her an unofficial but much-beloved, world-wide ambassador for the Acadian people.

In 1999, composer and lyricist Vincent de Tourdonnet brought Maillet’s Pélagie to Confederation Centre where the developing musical was workshopped. Pélagie-la-Charette became a successful musical produced in both French and English that toured several venues in Canada.

“On behalf of the Board of Directors, CEO Jessie Inman, and Professor Tom Symons, for whom this lecture is named, we are elated to announce Antonine Maillet as the recipient of the 16th Symons Medal,” remarked Chair of the Fathers of Confederation Buildings Trust, Wayne Hambly. “Mme Maillet is a leading creative voice for Canada, a writer of great renown, and a global champion for Acadians everywhere. We welcome her return to Confederation Centre this fall.”

Photo Cutline: A Companion of the Order of Canada and an Officer of the French Légion d’Honneur, Canadian writer, broadcaster, and scholar Antonine Maillet was the 2016 recipient of the prestigious Symons Medal (submitted image).