On May 20, 2014, Charles, Prince of Wales, visited Prince Edward Island as part of a four-day Royal Visit to Canada alongside his wife Camilla, the Duchess of Cornwall. 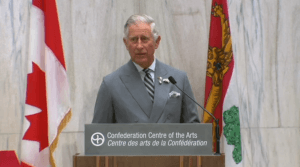 federation Centre’s Memorial Hall, Charles, Prince of Wales was  presented with an honorary Symons Medal from Professor Thomas H.B. Symons. After thanking his hosts for the award, the Duke of Cornwall offered remarks, cautioning the assembled guests of the “huge challenges” facing the world, including the growing gap between rich and poor, the need to grow opportunities for women, climate change, the dangers of over-fishing and deforestation, and the need to support fledgling pro-democracy movements where they exist. 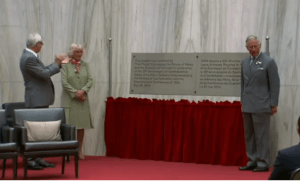 “We are elated to announce Mr. Lewis as the recipient of the 12th Annual Symons Medal,” stated Mr. H. Wayne Hambly, Chairman of the Fathers of Confederation Buildings Trust. “Mr. Lewis is a leading social democrat of his generation, an internationally celebrated Canadian, and a respected human rights activist who has spent a lifetime working to improve the human condition, both at home and abroad.”

Mr. Lewis appeared in Charlottetown for the Symons Medal Ceremony and Lecture on November 21. The Symons Medal Lecture is a national platform for an eminent Canadian to discuss the current state and future prospects of Confederation.

Mr. Lewis’ life is one of exemplary service to Canadians whether in elected office or positions of leadership representing the nation or the United Nations. A member of the Order of Canada, Mr. Lewis is a Professor of Practice in Global Governance at the Institute for the Study of International Development at McGill University and a Distinguished Visiting Professor at Ryerson University. He is the board chair of the Stephen Lewis Foundation, which is dedicated to turning the tide of HIV/AIDS in Africa, and he is co-founder and co-director of AIDS-Free World, an international advocacy organization.

Mr. Lewis is also a past member of the Board of Directors of the Clinton Health Access Initiative, and Emeritus Board Member of the International AIDS Vaccine Initiative. He served as a Commissioner on the Global Commission on HIV and the Law; the Commission\’s landmark report was released in July 2012.

Mr. Lewis’ work with the United Nations spanned more than two decades. He was the UN Secretary-General’s Special Envoy for HIV/AIDS in Africa from June 2001 until 2006. From 1995-99, Mr. Lewis was Deputy Executive Director of UNICEF at the organization’s global headquarters in New York.