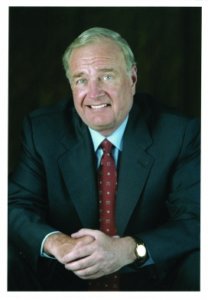 Former Canadian Prime Minister, The Right Honourable Paul Martin, was selected to receive Confederation Centre of the Arts’ Symons Medal and give the 11th National Symons Lecture on the State of Canadian Confederation. Mr. Martin’s lecture, later published and distributed in Canada, was entitled Confederation Today and Aboriginal Canada and took place on Thursday, October 10, 2013.

A Companion of the Order of Canada, Mr. Martin was Prime Minister of Canada from 2003 to 2006 and Minister of Finance from 1993 to 2002. Mr. Martin also chaired the British-Norwegian poverty alleviation and sustainable development fund for the Congo Basin Rainforest. He also sat on the Advisory Council of the Coalition for Dialogue on Africa, sponsored by the African Union, the UN Economic Commission for Africa, and the African Development Bank.

Domestically, he leads the Martin Aboriginal Education Initiative, concentrating on improving the elementary and secondary school education of Canada’s Indigenous peoples. Before entering politics, Mr. Martin had a distinguished career in the private sector as a business executive at Power Corporation of Canada and as Chairman and CEO of The CSL Group Inc.

“In its reports on Human Development, the United Nations consistently acknowledges Canada as a global leader,” offered Mr. Martin. “At the same time however, it notes the ongoing struggle of Aboriginal Canadians in their pursuit of achieving equity regarding economic, social, and cultural rights. It is time for Canada to give life to the constitutionally protected inherent right to self-government, ensuring Aboriginal Canada is given a seat at the national table.”

“We are extremely pleased to welcome The Right Honourable Paul Martin to present this year’s Symons Lecture and share his insights on the topic of Aboriginal Canada in 2013,” said Mr. H. Wayne Hambly, Chairman of the Fathers of Confederation Buildings Trust.