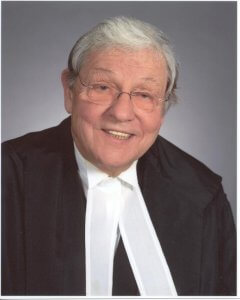 Confederation Centre of the Arts was pleased to award the second annual Symons Medal to Hon. Roy McMurtry, Chief Justice of Ontario.

Mr. McMurtry was called to the bar in 1958 and practiced law as a trial counsel for 17 years before being elected to the Ontario Legislature in 1975. Upon election, he was immediately appointed to the cabinet of Premier William G. Davis as the Attorney General for Ontario, and served in that position until 1985. He was deeply involved in the patriation of the Canadian Constitution and the creation of the Canadian Charter of Rights and Freedoms. During that period, he also served four years as the Solicitor General for Ontario.