Award-winning Canadian broadcaster, environmentalist, author and icon, Dr. David Suzuki, has been chosen to receive the Confederation Centre of the 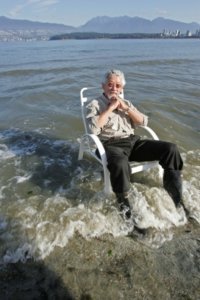 Arts’ Symons Medal and give the 10th National Symons Lecture on the State of Canadian Confederation. Dr. Suzuki’s lecture is entitled ‘Humankind as a Geological Force’ and it will take place on Friday, November 16, 2012 at 12:30 p.m. in Confederation Centre’s Homburg Theatre.

Dr. Suzuki, Co-Founder of the David Suzuki Foundation, is renowned for his more than 30 years of work in broadcasting and is recognized as a world leader in sustainable ecology. He is Companion to the Order of Canada and a recipient of UNESCO’s Kalinga Prize for science, the United Nations Environment Program medal, the 2009 Right Livelihood Award, and numerous other awards and accolades.

Dr. Suzuki is very familiar to audiences as host of the long-running CBC TV program The Nature of Things, and as the original host of CBC Radio’s Quirks and Quarks, as well as the acclaimed series It’s a Matter of Survival and From Naked Ape to Superspecies. Dr. Suzuki’s written work also includes more than 52 books, 19 of them for children.

“It is a true honour to have Dr. Suzuki present the 10th annual Symons Lecture and share with us his experience and wisdom on the topics of human development and sustainability,” says Mr. H. Wayne Hambly, Chairman of the Fathers of Confederation Buildings Trust. “He is an internationally celebrated Canadian and his insights will be of great interest to our lecture audience.”

The Symons Medal and Lecture provides a national platform for a distinguished Canadian to discuss the current state and future prospects of Confederation. It provides all Canadians an opportunity to reflect upon their country and its future. The Medal Ceremony and Lecture, which is intended to be broadcast and published, is held each year to mark the 1864 meetings of the Fathers of Confederation in Charlottetown.

Public tickets moved extremely quickly and are now closed. To place your name on a waiting list, please contact the Confederation Centre of the Arts box office at 1-902-566-1267 or, toll free, 1-800-565-0278. Tickets are free of charge but donations for the Symons lecture will be gratefully accepted. The lecture will also be webcast live on confederationcentre.com free of charge.

Photo Credit:
Dr. David Suzuki will receive the Confederation Centre of the Arts’ Symons Medal and give the 10th National Symons Lecture on the State of Canadian Confederation on November 16, 2012 in Charlottetown, Prince Edward Island (Kent Kallberg photo).