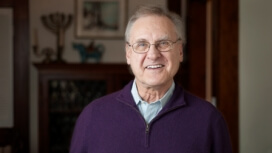 Confederation Centre of the Arts, Canada’s national memorial to Confederation, is pleased to announce the awarding of its prestigious Symons Medal to Canadian human rights activist, Stephen Lewis.

“We are elated to announce Mr. Lewis as the recipient of the 12th Annual Symons Medal,” says Mr. H. Wayne Hambly, Chairman of the Fathers of Confederation Buildings Trust. \”Mr. Lewis is a leading social democrat of his generation, an internationally celebrated Canadian, and a respected human rights activist who has spent a lifetime working to improve the human condition, both at home and abroad.”

Mr. Lewis will appear in Charlottetown for the Symons Medal Ceremony and Lecture on November 21 at 12:30 p.m. in the Homburg Theatre. The Symons Medal Lecture is a national platform for an eminent Canadian to discuss the current state and future prospects of Confederation. Held each fall to mark the 1864 meetings of the Fathers of Confederation on P.E.I., it provides all Canadians an opportunity to reflect upon their country and its future. Past recipients include His Royal Highness Prince Charles, Prince of Wales; His Excellency the Right Honourable David Johnston; The Right Honourable Paul Martin; and Mary Simon, President of the national Inuit organization Inuit Tapiriit Kanatami.

Mr. Lewis\’ life has been one of exemplary service to Canadians whether in elected office or positions of leadership representing the nation or the United Nations. A member of the Order of Canada, Mr. Lewis is a Professor of Practice in Global Governance at the Institute for the Study of International Development at McGill University and a Distinguished Visiting Professor at Ryerson University. He is the board chair of the Stephen Lewis Foundation, which is dedicated to turning the tide of HIV/AIDS in Africa, and he is co-founder and co-director of AIDS-Free World, an international advocacy organization.

Mr. Lewis is also an immediate past member of the Board of Directors of the Clinton Health Access Initiative, and Emeritus Board Member of the International AIDS Vaccine Initiative. He served as a Commissioner on the Global Commission on HIV and the Law; the Commission\’s landmark report was released in July 2012.

Mr. Lewis\’ work with the United Nations spanned more than two decades. He was the UN Secretary-General\’s Special Envoy for HIV/AIDS in Africa from June 2001 until 2006. From 1995-99, Mr. Lewis was Deputy Executive Director of UNICEF at the organization\’s global headquarters in New York. From 1984-88, he was Canada\’s Ambassador to the United Nations.

For more information, please visit confederationcentre.com/symonsmedallecture. Tickets for this exceptional lecture will be available on Monday September 15, at 10 a.m. There is no cost to attend but a printed ticket is required for admission.

The Symons Medal and Lecture honours Professor Thomas H.B. Symons, a supporter of Confederation Centre for many years and also a Board Governor. Professor Symons, the founding President of Trent University, is widely recognized for his work in the field of Canadian Studies, in particular in the areas of public policy, heritage, and education.