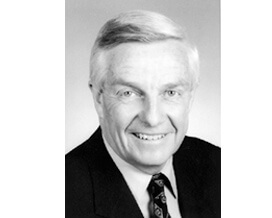 Newfoundland & Labrador’s political heavy hitter the Honourable John Crosbie will respond to Alberta’s political icon the Honourable Peter Lougheed this Thursday at the 2007 Symons Lecture on the State of Canadian Confederation. The two will engage in a lively and interactive discussion that varies slightly from the format of previous events in the lecture series.

Due to circumstances beyond his control, Mr. Lougheed will not be able to attend the lecture in person. Speaking from his home in Calgary, he has recorded an abbreviated version of his presentation on video that will initiate the discussion. Mr Crosbie will take up the challenge from Mr. Lougheed and present his response on the state of the nation. Premier Robert Ghiz will introduce the discourse and set the stage. “The objective of the Symons Lecture is to encourage Canadians to think and talk about their country, and here we have two eminent Canadian political legends doing just that,” says H. Wayne Hambly, Chair of the Fathers of Confederation Building Trust. “Mr. Lougheed absolutely wanted to be here in person. He has gone to great lengths to be able to record the crux of his lecture that we may present it on his behalf to the audience.” “Mr. Crosbie is always ready for discussion and debate, and along with the opening comments of Premier Ghiz, we anticipate a dynamic afternoon from these three distinguished speakers,” Hambly adds. The Symons Lecture begins at 1 pm in the Mainstage Theatre of the Confederation Centre of the Arts in Charlottetown, PEI, Thursday, November 8. The program will open with the Confederation Centre Youth Choir singing O Canada and I’m Dreaming of Home, a song they performed at the official dedication of the restored Canadian national memorial at Vimy Ridge earlier this year. In honour of the lecture given by the former premier of Alberta, the Confederation Centre Art Gallery is displaying an exhibition entitled, Some Artists Who Have Lived and Worked in Alberta. Established in 2004, the Symons Lecture provides a national platform for a distinguished Canadian to discuss the current state and future prospects of Confederation. The lecture is held each year to mark the anniversary of the meetings of the Fathers of Confederation in Charlottetown in 1864. Starowicz’s lecture, called “Whose Story? Storytelling as Nationbuilding,” takes place in the Centre’s Mainstage Theatre at 1 p.m. and is open to the public.