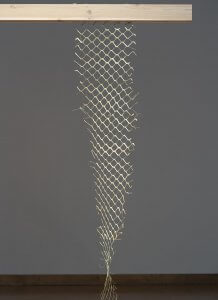 Look slowly and all that moves,combines images and objects derived from inquiries into the shifting maritime landscape of Prince Edward Island. In 2017, Banff-based artist Tyler Los-Jones, whose work explores the formal underpinnings of our relationship to the natural world, undertook a research residency in which he explored natural histories of the Island through site visits and discussions with community members closely involved with the past, present and future state of the local landscape. Wary of too casually representing a place that he did not have a strong personal relationship with (his work to that point primarily focused on the geology of the mountainous terrain of Alberta), Los-Jones avoided extracting aesthetically-pleasing views in the manner of a tourist, and focused instead on making new kinds of connections to the land and water, through the slow accumulation of encounters and ideas.

The resulting exhibition presents photography and sculpture framed by an enigmatic  display architecture that acts as a structure for hanging works in mid-air. “Aggregate” photographs making reference to mussels clinging to a sock—itself a slowly accumulating, suspending architecture—are hung from display structures that deploy the textures and shapes of beachside pergolas and picnic tables; these objects mimic the orthogonal logic of the cavernous gallery and the warm tones of its bamboo floor. The structures create bounded zones within the space, but are incomplete in their geometry, productive of shifting viewpoints, and above all porous, producing layered views of image, structure and architecture. Other hanging photographs capture lichens, adjacent to nets made from dune-stabilizing marram grass; another work is derived from the casting of sand into thegeometric patterns found in dune-stabilizing materials. The installation as a whole has the character of a fragile, open-ended construction, one that is strong yet light, built to hold its shape while allowing things to pass through it.

The delicate threads that hold Look slowly and all that moves together emerged from the search for formal strategies appropriate to the Island’s ecology. What the artist encountered during his residency was a consistent impulse to stabilize the Island’s changing and permeable marine boundaries and structures through semi-porous means of binding—used by organisms ranging from lichens and grasses to humans employing nets and geotextiles for aquaculture and fighting erosion. Los-Jones’ own approach to forming—in the constellation of images, objects, and their formats of display—thus developed by analogy with the environment being represented; the artist worked through his relationship to an unfamiliar landscape by drawing upon the morphologies of the various human and nonhuman processes that interacted to shape and unshape it.

The “looking slowly” embodied in Los-Jones’s method of letting the environment shape his representation of it developed out of a longstanding critical engagement with landscape photography, and a desire to open it up to other approaches or ways of understanding the photographic process. Since the invention of photography, the landscape has been subject to “the camera’s nonstop attentions,” to borrow a phrase from Susan Sontag. Inheriting a visual rhetoric of the view from Romantic imagery, the landscape photography that has so profoundly shaped our relationship to the environment positioned “nature” as a function or extension of human experience in a way analogous to our overpowering, and dangerous will to transform the environment. At the same time, however, photography has also been understood as a nonhuman, autogenous kind of picture-making, the preservation of a literal imprint of nature, made by nature. Its rhetorical power as an objective medium derives in great part from this materialist understanding of the photograph as the result of a physical process. It is thus an ideal site for intervention, for reimagining our representation of the world as part of a continuum of forming and unforming, of replicating and preserving. The artist’s early work involved the manipulation and redeployment of landscape photography in unexpected modes of display that destabilized the touristic panorama of the Rockies. By now, in Look slowly and all that moves, the photograph’s “natural” picture-making has extended into space, taking in the viewer’s encounter with the work, restaging it as physical immersion in an ecology of the gallery. The artist’s work sets off a feedback loop in which the not-always-human process of capturing or fossilizing a fleeting world stands revealed as the temporary foundation for another. 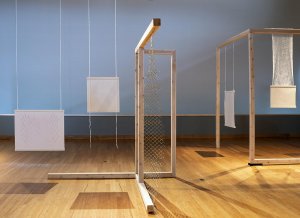 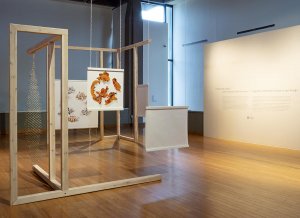