L.M. Montgomery’s Anne of Green Gables is even more than a classic novel and brilliant musical: it inspires a state of mind, a way of being in a special place. This “Anne place” is suffused with colour and charged with energy; it is Prince Edward Island, and it is also the landscape of the human heart.

Anne of Green Gables (1908) was an immediate best-seller and has since sold millions of copies in more than thirty languages. Don Harron, Norman Campbell, and Elaine Campbell believed that only a musical could hope to capture, for theatre, the magic of Montgomery’s writing and Anne’s imagination.

During this 150th anniversary of the Charlottetown Conference that began Canada, and the 50th anniversary of the Confederation Centre of the Arts built to commemorate that historic meeting, this exhibition celebrates Montgomery’s generative genius and the golden 50th season of the Confederation Centre’s crown jewel, Anne of Green Gables-The Musical™. 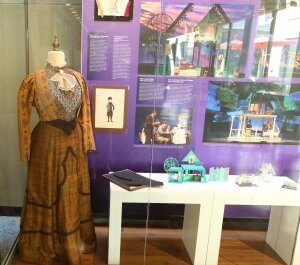