As the gallery receptionist, Debbie Muttart has spent more time in the Confederation Centre Art Gallery than perhaps any other person. Here for hundreds of shows, Debbie has helped introduce countless people to an ever-changing gallery experience. This exhibition celebrates her nearly 25-year career as an integral member of the Confederation Centre staff.

Growing up in Charlottetown, the Centre drew Debbie in at an early age; with formative teenage hours spent in the many welcoming pockets that this building provides. Since then she has  been introducing this captivating space to the thousands who visit each year.

Works that have been chosen from the gallery’s collection are shaped by Debbie’s interactions with the many artists she has met, by her connection to the work presented, and by her daily interactions with the public who have come to explore. Debbie’s love of animals, to which anyone who knows her can attest, also helped shape the works chosen. From landscape to sculpture, from mural to repurposed object, the binding tie is Debbie’s hope that this show be calm and welcoming, a reflection of her role and of the gallery itself. 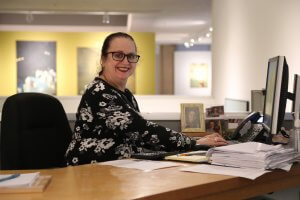