Each time I venture into “the vault,” in search of inspiration for an exhibition, I am struck by the presence of certain repeated shapes and subjects in the Gallery’s collection. Taken as a whole, these seem to reveal the recurring thought patterns of artists. And this idea that the artwork externalizes an artist’s interior is in itself a fixation for many artists who gravitate unsurprisingly to shapes that produce interiors—spheres and circles—and certain functional referents—bubbles, eyeballs, skulls, and other containers. This exhibition brings together examples of these ubiquitous forms, and reminds us that the gallery and exhibition are themselves the container and outward face of a hidden interior, a selection from the contents of a collection.

These “icons of the interior” make a theme of the process of materialization, of substances receptive to forming, and of the materialist source of thought—precipitation, soft forms and materials, blobby masses, and the brain. The relationship between humans and inert matter, between inside and outside, and ultimately between artwork and external world, are articulated in such works as if points on a continuum. At one pole is the autonomous, transcendent sphere, with its perfect ratio of boundary to volume, as in Ed Zelenak’s cosmic To Reaffirm the Wholeness of Self, and on the other a general dispersal across space, thought grounded in necessity and the vernacular world. The elevated isolation of perfect, rounded and bounded things is undermined by the association with brand identity, and by a scattered-across-the-floor “composition” in the plaster pills of Colleen Wolstenholme’s Spill, described by the artist as the product of a therapeutic “hard labour.”

The mediation between interior and exterior is often articulated by artists through the opposition of the eye’s perception and the hand’s labour, analogous to the perfection of the sphere’s flattened “optical” projection, as in Claude Tousignant’s paired Ultra Cadmium, and to the receptive fluidity of soft material, the round ball inscribed and shaped by the hand. In Barbara Astman’s untitled (Fruit Series #5), in which images of apples and pears are sealed in layers of encaustic, decaying symbols of knowledge represent the finitude and materiality of the sphere’s perfection. Marion Wagschal’s Figure, 1976 relocates the origin of artistic creation away from the head altogether, in the earthly sphere of reproduction, a maternal belly. 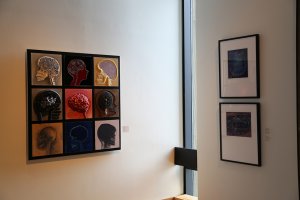 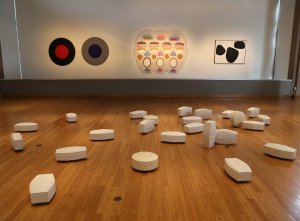 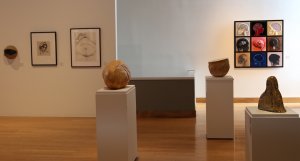