Perpetual brings together a selection of recent work by St. John’s artist Philippa Jones that explores ways of dealing with loss and mortality through the neutralizing effects of preservation, aesthetic arrangement, immersive ritual, and ultimately recognition of a natural continuum, the temporal cycle that encompasses all being. Catalyzed by the untimely death of close friend and collaborator, Newfoundland curator Mary MacDonald, the artist’s explorations of the processes of extraction from the everyday world, common to art and science, take on a heightened resonance. In this exhibition, Jones’s hyperreal pictures of exposed and preserved natural specimens resemble fragments of lucid dreams, revelatory flashes that at the same time preserve the nightmarish, uncanny aspect of the act of capturing life in an image. Jones deals with death by fixing it in the constructed time and space of the artwork, in the artist’s words “making death dead forever.”

The passage, stoppage and multiplicity of time have long been fundamental to the work of Jones, who first achieved major notice in 2014 with the inclusion of her depictions of imagined “mini-universes” in the National Gallery’s Canadian Biennial. These products of the so-called Ministry of Intuitive Research in Imagined and Actual Discoveries (MIRIAD) whimsically explored, in imagery of crystalline, fantastical landscapes, the possibility of a scientific method that self-consciously constructed evidence designed to adapt to a purely imaginative hypothesis, “free from preconceptions.” The process of extraction from the continuum of life fundamental to the scientific method, as well as the practice of museum display, was taken by this artist-driven umbrella organization to perhaps its most absurd extreme with “The Newfoundland Bubble,” which hypothesized the formation of a bubble over Newfoundland during the winter months, thus explaining the timeless and never-ending phenomenon of “winter setting in” on the island. The freezing of time, the freezing of data, the freezing temperatures; all are equated in a construction that proposes the careful arrangement of information for display—enclosure, suspension, attention, elevation, constructed finitude, in short the aesthetic —as an exercise in mimetic liberation, neutralizing the cold by putting it in cold storage.

More recently, Jones has replaced imaginative whimsy with an unflinching eye on death itself, trapping natural specimens in resin balls, representing the exposed insides of animal corpses in gorgeous detail in large-scale watercolours, depicting dead rabbits in ceramic, lit from the inside like votive candles. The new works foreground our experiential relationship with such frozen moments. In Breath Cartography, a work is literally animated by the presence of the viewer, whose movements and proximity bring the work to life. The interactive installation Suspended, first shown in early 2019 at The Rooms Provincial Art Gallery in St. John’s in an eponymous solo exhibition, features gold-leaf benches surrounded by an array of hanging resin orbs, each of which contains organic materials preserved for future examination (or animation). Viewers are encouraged to lie on the benches in a supine position, to be captured in the pose of a funerary statue, surrounded by portents of death and possible rebirth.

Suspended gathers together all of the themes of Jones’s recent work, offering viewers a temporary experience of the stoppage of time, and a place where the clinical view of science and the imaginative speculation of fantasy are superimposed. 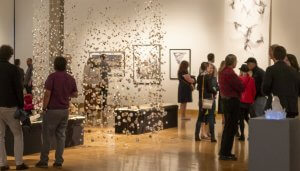