Take this Island now / A cradle it is: / Small enough to rock

Geologists are not sure when it first happened. At some point in the distant past, the waters surrounding Prince Edward Island wore away at its sandstone base until the land mass came free, adrift. It floated out into the Atlantic—becoming the source of the Atlantis legend, some believe—until the tides carried it back once again to the Gulf of St. Lawrence. Its Mi’kmaq passengers named the isle Abegweit: loosely translated as “cradled on the waves.”

P.E.I.’s periodic peripateticism has made it a wonder of the natural world, but has also made it easy to miss—both looked over and overlooked. Some mapmakers and illustrators have tried to capture its absence visually, while others have been completely unaware of its existence. Missing the Island traces a history of those times when terra was less than firma. 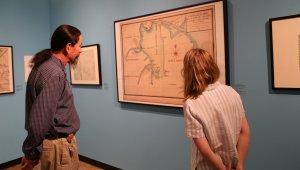