Across North America during the 1970s close to a million young people, mostly from major urban centres, moved “back to the-land.” Informed by a shared critique of consumer-oriented society, the Vietnam War, and the homogenizing, often oppressive effects of mass media, this generation sought to live in ways that were more authentic, self-reliant and better attuned to the natural world. Many of these people acquired small farms and began new lives in places including Cape Breton and Prince Edward Island, and in other parts of Atlantic Canada.

While “doing our own thing” was a phrase that back-to-the-landers used as a shorthand for the principles by which they lived, it’s likely that it originated from Ralph Waldo Emerson’s 1841 essay, Self-Reliance, where he wrote “(b)ut do your own work, and I shall know you.” Like Emerson’s essay, this expression reflects an emphasis on nonconformity, self-sufficiency and on “doing” itself. The everyday activities of back-to-the-landers, from building homes, gardening, caring for animals, maintaining farm machinery, to childbirth and social gatherings were expressive of their values and ideals.

Many back-to-the-landers were highly educated, often in the arts. Suspicious both of representation, which was often aligned with advertising, propaganda, and other forms of social control, and the art object-as-commodity, back-to-the-landers turned to “doing” and “making,” or art as action rather than merely interpretation and reflection. This nexus of ideas paralleled developments in the art world, where by the late 1960s artists were embracing en masse the use of instructions and the notion of art as information and art-as-life.

This exhibition stands in contrast to a conventional focus on the neo-artisanal objects one tends to associate with the back-to-the-land movement, that largely remain tied to a market-based, tourist-driven economy in the region. In the early years of the movement, the lived practices of self-sufficiency, the sharing of information through independent publications, the appreciation of the ephemeral and the invention of new social forms were at the forefront of their aesthetic. The projects included in this show return to this moment, conflating the distinction between art and life, focusing on the use of information and the production of functional objects. Photographs by the painter and photographer, George Thomas, many of which were shot to illustrate articles for back-to-the-land publications such as Harrowsmith, or as promotional images for products including furniture and woodstoves, depict the living spaces and day-to-day activities of many back-to-the-land families in Cape Breton. Italian architect Cristina Lisi’s early 1980s research on hand-made houses on Prince Edward Island is presented in its original form – snapshots, sketches, drawings, and texts, meant for publication in a planned book.

The Whole Earth Catalog Library, which includes books and other resources listed in the Whole Earth Catalog, illustrates the role of information sharing within the movement. And Simon Brown’s fictionalized “academic” presentation proposes a hidden link between conceptual artists of the era, and the ethos and practice of back-to-the-landers.

Doing Our Own Thing also examines the legacy of the back-to-the-land movement in three contemporary projects by artists who grew up in back-to-the-land families in the Maritimes. Sheilah Wilson considers this legacy in Slowly the Pilgrim, Sweetly the Way, an examination of personal memories in photo and text-based works that link stories and images collected from Prince Edward Island and Pictou County, where she was raised. Bay, Caili, and Seth Woodyard have created a site-specific installation that combines video, sculpture and textiles. The work explores the structure, texture and stories of their childhood spent in a geodesic dome built by their parents in DeGros Marsh, P.E.I., what they call the “theatre in which our family narrative played out.” And Fenn Martin’s Thrasher 002 is a fully operational grain threshing machine complete with instructions modeled on those that appeared in the Whole Earth Catalog. Designed for use on Martin’s farm near Antigonish, Thrasher 002 recuperates an older technology as part of his own 21st century back-to-the-land project, suggesting that these ideas and practices continue to be relevant and useful today. 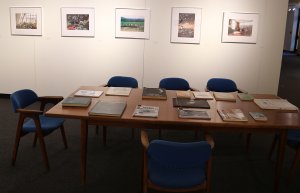 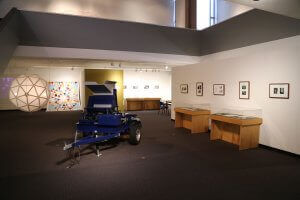