In Changing Environs, artist Catherine Miller presents her investigation of the entwined and often conflicting pressures of landscape, land use, environmental protection and climate change. No small challenge. And given the polarized debate around environmental and economic systems, and balances locally and globally, Miller has contributed accessible images to infill gaps in the climate change conversation in P.E.I. Miller clearly relies on the comforting and expressive nature of textiles and uses traditional quilting, weaving and sewing techniques as a departure point for her work. Miller’s long engagement in craft practices, as well as her interest in climate change research, provides a rich vocabulary for timely and socially engaged works originating on the Island—works of art that clearly link climate change and culture.

Miller’s work makes a very tangible contribution to discussions and consultations on sustainability now underway. The government of P.E.I. has recently published Planning for a Sustainable Future which is intended to assist its Environmental Advisory Council in promoting a dialogue on a new sustainable development strategy for the province. This initiative stems from the document New Foundations: Report of the Commission on Land and Local Governance, 2009. The report described sustainability as one of nine key principles that could provide a new land use framework for the province.[1]  A Land Use Policy Task Forcehas also been announced in recent months with a mandate to carry out research and consultations to develop detailed recommendations for Land Use Policies.[2]A new Lands Protection Act Commissioner was just appointed.[3]  Clearly there is significant interest in this topic.

Some of Miller’s works have a pictorial straightforwardness (there is no mistaking her subject in images that combine domestic water drawn from red earth, golf course greens, a manicured lawn and carefully tended garden). Abandoned House, 2012, is rendered from thread line. The shingled façade of a gabled house provides an ethereal image of home, suspended like a fishing net hung on a line to dry. Miller’s poetic metaphor for the decline of rural populations is tethered to the ground by fragments of sandstone from an old foundation.

Wave, 2011, is formed from an array of lace doilies and facsimile $20 bills that sit like a puddle on the gallery floor. Miller’s use of out-of-style family heirloom doilies is a call for creative long-term solutions rather than costly short-term fixes. Rising Sea Level, 2010, is comprised of a series of five woven wall hangings that forecast the effects of rising sea levels on the shape of the island(s). The landmasses, shaped from hand-drawn iron nails woven into the white cotton fabric, are coloured by the rusting action of water and plaster “painted” on the hand-woven cloth and nails.

Miller’s interests reflect the interrelated range of environmental issues at the core of reports on land use and land protection in P.E.I. It is informed by the discussion of climate change science and can also be seen in the context of larger contemporary art projects like those of British artist, David Buckland, who began the Cape Farewell project in 2001 to instigate a cultural response to climate change. Buckland has brought artists, scientists, and communicators together to stimulate the production of art founded in scientific research.[4]And nearer to home, Catherine Miller has shown that we can benefit from creativity in a resilient response to climate change: conversation by conversation, stitch by stitch.

On Earth Day, April 22, at 7 p.m.,  the Gallery will host a panel discussion on climate change in the Changing Environs exhibition.

BIOGRAPHY:
Catherine Miller credits her grandmother with her very early and practical introduction to textiles. In the early 1980s, Miller studied at Sheridan College, Oakville, Ontario and at the Nova Scotia College of Art and Design, Halifax and is an active member of the P.E.I. arts community.

[2]Planning for a Sustainable Future, Government of PEI, July 2012 <www.gov.pe.ca/photos/original/taskforcetr.pdfp. 2 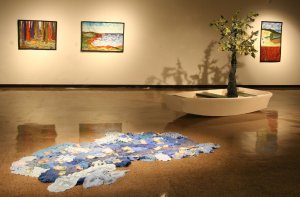