This exhibition presents abstract works from the Confederation Centre Art Gallery’s collection that expand the fundamental elements of painting—colour, line and surface—beyond the conventional rectangular canvas. The late 1960s offered unprecedented possibilities for artists as new mediums and approaches appeared in great numbers-video, performance art, Minimalism, conceptual art, land art. These changes accompanied massive social changes, and in this dynamic environment the traditional medium of painting perhaps appeared to be a dead end to some observers, a sense exacerbated by the context of an often reductive and limiting discourse surrounding the art form in North America.

Painting continued to flourish, however. Maintaining the medium’s focus on the visual allure of colour and surface, artists began stretching, constructing, warping, and rethinking its boundaries.

One can trace this narrative in Canada as painters broke away from the dominant modes of Abstract Expressionism and Colour Field Painting in different ways. Ron Martin, for example, began experimenting with shaped canvases and with the expansion of the optically-based model of painting beyond the notion of the immediately perceived, individual, canvas. With the pairing Conclusion and Transfer, a single work made up of two identical triangular canvases that retain the look and structure of hard-edged abstraction, the artist displaces the autonomy of the single painting into a larger perceptual realm encompassing the movement of the viewer.

Another divided canvas, Homage to Fuller, by New Brunswick artist Claude Roussel, incorporates the modular and sculptural into a hybrid form of painting that acknowledges in its title the influence of the boundary-crossing architect Buckminster Fuller. Denis Cliff’s Tracer 638 Warm Exchange, and the shaped canvases of Joseph Drapell, embrace the austere innovations of Frank Stella while simultaneously finding sheer visual pleasure in colour and texture. And Ronald Kostyniuk and Zbigniew Blazeje drew upon the legacy of Russian Constructivism to extend the possibilities of the abstract canvas into physical space. Finally, the more recent work of Robert Youds represents a contemporary variation on the expansive abstract painting developed first in the 1960s, in works that combine the physical presence of sculpture with the effects of coloured light.

Built from Colour is curated by Kevin Rice and Pan Wendt. 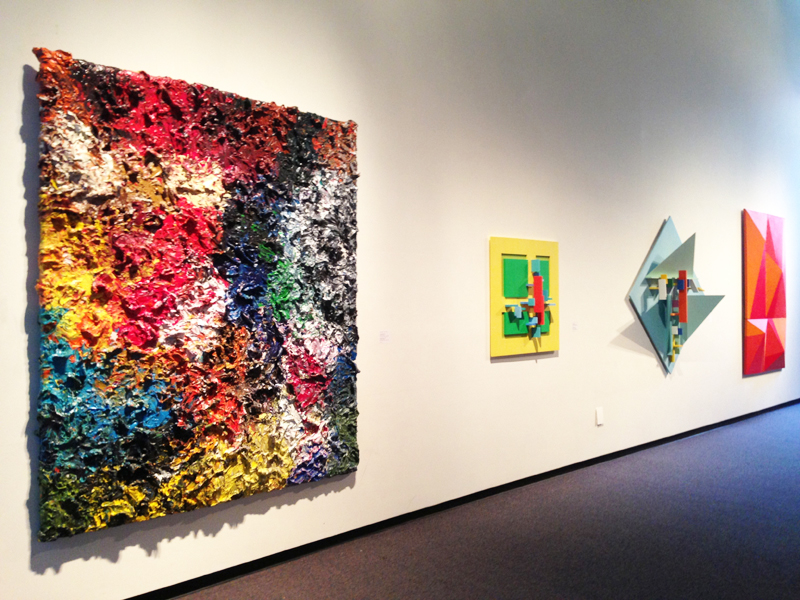