The Centennial Projects are a series of major works of architecture resulting from several federal government programs leading up to the Centennial of Confederation in 1967. The ambitions of these programs, which amounted to a gigantic public building campaign, went beyond the strictly utilitarian, aiming to uncover and give form to the identity of a modern nation entering its second century of existence.

Between 1964 and 1970, the Centennial Grants Program and the Centennial Memorial Program provided funding for over 2,300 projects across the country, including some 860 buildings, many of which are important landmarks in their communities; several are important works within the development of Canadian modern architecture. In this exhibition, we present 21 of the most important of the buildings to emerge from the Centennial programs. These are organized loosely into three themes: Building the New; Brutalism and Landscape; and National Identity and Regional Difference.

All the buildings presented, from the National Arts Centre in Ottawa to the UFO Landing Pad in St. Paul, Alberta, are important documents of this particular moment in Canadian life and culture. The Centennial Projects, in the youthfulness and vigour of their design, matched well to the youthfulness, vigour, and optimism of Canada in the 1960s. Now, 50 years on, it is time to re-examine this remarkable moment in Canadian architecture. 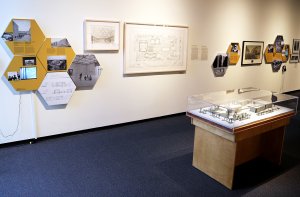